Up to their necks in it: Easter Island statues

Easter Island or Rapa Nui sprang to mind when Alia Ullah, marketing officer at Manchester Museum, asked the Collections team at Manchester Museums to write blogposts in response to the BBC’s new series Civilisations. This ‘reimagining’ of Kenneth Clark’s inspirational 1969 documentary is fronted by Mary Beard, David Olusoga and Simon Schama and it was the latter who presented the first programme last night. Civilisations ‘examines humans’ relationships with creativity, from the very first representation of beauty, to today’. Of course, that allows for a multitude of artistic work throughout history and prehistory.

Now, it wasn’t mentioned last night but for my money the stunning material culture of the people of Easter Island or Rapa Nui must get a mention somewhere in the series. When several years ago, Manchester Museum put on an exhibition to mark the loan of an Easter Island statue from the British Museum we focused on the island’s iconic statues, how and where they were made, how they were moved around the island and the meaning that they had for the Rapanui. The BBC’s Civilisations series offers an opportunity to revisit the fascinating culture of the island.

When the first Europeans who arrived off the coast of Rapa Nui during the 18th century they were astonished to see the stone statues. A famous print by Gaspard Duche de Vancey (1756–1788) shows the Comte de la Perouse, the leader of the French expedition, and members of his crew investigating a statue whilst having their hats stolen and pockets picked by the people of the island, the Rapanui. In many ways, this image epitomises the European reaction to the inhabitants: astonishment that they could have created the statues given their impoverished way of life; and amusement that they brazenly pilfered visitors’ hats and handkerchiefs. The Rapanui, it was suggested, must have come along at a later date and were living amongst the ruins of an earlier and far more advanced civilisation. Not only did they not understand the works of their predecessors but in their ignorance, they pulled down their statues. This aspect of the interpretation of the works of art was not discussed in the first programme of Civilisations  but this tendency to make value judgements of indigenous peoples in order to justify the spoliation by Europeans of works of art and antiquities must surely feature at some point  in Civilisations.

Underlying this sniffy attitude to the locals was an inability to accept any monumental sculpture without the usual accompanying Greco-Roman panoply of towns and cities, roads, aqueducts, and civic architecture. The Swiss ethnographer Alfred Metraux (1902-1963), part of a Franco-Belgian expedition to Easter Island during the 1930s, observed that one of his companions expected to see the walls of ancient cities – similar to Mohnejo-daro – emerge beneath his pick. When they wern’t found, it was claimed that Easter Island or Rapa Nui must be the only piece of land surviving from what was once a much larger continent, which like Atlantis, had sunk catastrophically beneath the waves. On this hypothetical submerged continent, it was argued, were the remains of the expected features of civilisation deemed necessary to underpin the stone statues.

Of course, no evidence of the existence of a sunken continent in the mid-Pacific has ever surfaced. The suggestion is reminiscent of the rather desperate explaining away of the stunning bronzes from Ife in Nigeria by the German anthropologist Leo Frobenius (1873-1938) as products of a supposed advanced civilisation that once existed off the coast of West Africa. There was nothing like the Ife bronzes amongst the African art with which Europeans were already familiar. Frobenius suggested they must have been given to Africans on the mainland before the island, like the legendary Atlantis, sank beneath the waves. 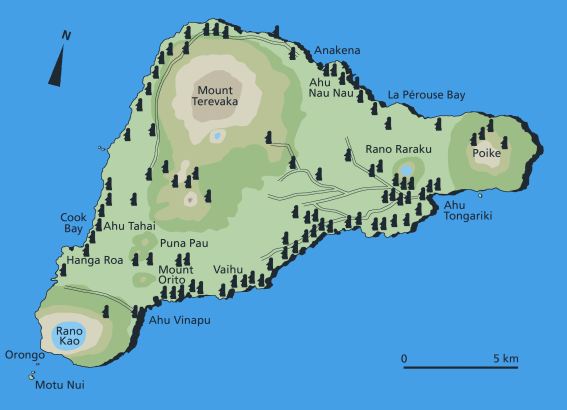 It is now accepted that the skilled craftsmen and artists of Medieval kingdom of Ife made the bronzes just as the ancestors of the Rapanui made the statues or moai. And what prolific artisans the Rapanui were: about one thousand moai are known from the island and most of them were carved in a quarry in the volcanic crater of Rano Raraku. The rock is known as volcanic tuff and is relatively soft when freshly exposed. The significance of the volcanic sites to the Rapanui as entrances to the Underworld would have made rock obtained there symbolically important. This may explain why the Rapanui went to such lengths to make their statues out of this material.

About half the moai of Rapa Nui still remain in the quarry in various stages of completion and some are so jumbled together it would have been impossible to remove them without damaging others. Perhaps they were not meant to be removed and erected, and that they are really large rock art or petroglyphs, in which the island excels. The massive statue known as El Gigante, which is still in the quarry at Rano Raraku, is 65 feet (20 metres) tall and is estimated to have weighed up to 270 tons. Paro, the largest statue erected, is almost over 30 feet (10 metres) tall and weighed 82 tons.

Excavations undertaken by the British team in the volcanic crater at Puna Pau.

If we are to answer some of the many questions that still remain about the island we have to look to archaeology or to experimental archaeology to answer them. In the first programme of Civilisations Simon Schama showed how archaeological excavation had revealed the antiquities of Mesopotamia, bronzes at Sanxingdui in China and Mycenaean sealstones at Pylos in Greece. In 2015 Manchester Museum worked closely with Prof Colin Richards and a team of archaeologists from University College London, Bournemouth University and University of Highlands and Islands on an AHRC-funded programme of fieldwork on Rapa Nui. One of the sites they excavated was the quarry in the small, extinct volcano at Puna Pau where the distinctive hats or pukao for the moai were carved. In the course of their work it has been estimated that the Rapanui removed some 1000 cubic metres of rock from the quarry inside the volcano. Head wear was very important in this culture but the colour made the pukao or headdresses of the moai even more significant because red represents power, vitality and authority (or mana) in Polynesian culture.

The Rapanui belief system and way of life changed irrevocably when Europeans came to the island during the 18th century. The Rapanui were eager to exchange goods and favours for European and New World commodities such as close-woven textiles, metal objects and trinkets and this seems to have undermined the traditional rites and invocations of the ancestors through the moai. Visiting ships in later years reported that fewer and fewer statues were standing. The last statue, Paro, fell in 1862-4. The toppling of the statues, the discovery of large numbers of obsidian weapons and stories about fighting in oral tradition all point to the violent collapse of traditional Rapanui culture. During the 1860s about one thousand Rapanui were  forcibly removed or “blackbirded” to serve as indentured labour in South America. Many died and the small number who eventually returned to Rapa Nui brought with them diseases, which killed many of those who had remained. Some Rapanui fled the island, which was increasingly given over to sheep grazing. After the island was acquired by Chile, in 1888, the population slowly began to recover. The construction of an airport, the start of regular flights from the mainland and tourism have brought  much needed income for the inhabitants and helped to restore their sense of identity and dignity.

Simon Schama said last night that human beings are art-making animals and that the urge to create has been intrinsic to us from the year dot. The hundreds of stone statues erected by the Rapanui must surely rank alongside the many stunning artistic works we saw last night, qualifying them too as monuments to human creativity. I don’t know at the time of writing whether the trio of presenters will talk about Rapa Nui but it seems to me that the island, its resourceful people and their fascinating material culture deserve to be taken seriously. Thankfully the BBC’s Civilisations series takes a much more international and multicultural approach than Kenneth Clark’s original.

Making Monuments on Rapa Nui: the Statues from Easter Island was shown at Manchester Museum in 2015. The content of this blog reflects the content of the exhibition, which was developed with Prof Colin Richards, formerly of the University of Manchester’s Department of Archaeology. It draws upon information from the AHRC-funded fieldwork undertaken by the British team and their Papanui and Chilean colleagues. However, readers should not infer that Prof Richards and others would necessarily agree with everything written here.