Some time ago Sarah Jane Clelland who is Research Associate in the School of Mechanical, Aerospace and Civil Engineering at the University of Manchester, approached the Museum to seek permission to sample objects in the Museum’s collection to test a new dating technique called rehydroxylation. Sarah-Jane kindly agreed to contribute an explanation of the technique and how it works to the Ancient Worlds Blog. She and Dr Moira Wilson plan to test the technique using pieces of pottery found in the same pit as the Manchester wordsquare.

Ceramics, pottery or “pot” is arguably the most common find on archaeological sites worldwide. The predictable way in which fired clay material absorbs environmental moisture via a process called rehydroxylation (RHX) provides, for the first time, a method of directly dating archaeological ceramics. In many respects the concept of RHX dating is simple and can potentially provide a date of manufacture for archaeological ceramics. This would be very useful for archaeologists studying all periods of our past. In practise it is quite a challenge for the researchers to determine when the observed gain in mass of a piece of ceramic is due only to the rehydroxylation reaction. However, current research at the University of Manchester in collaboration with Quantachrome  is working to address this. This research is led by Moira Wilson, who discovered that rehydroxylation proceeds at a predictable rate and co-invented the RHX dating technique. The idea that the gain in mass caused by absorption of moisture can be used to date archaeological and historic fired-clay by means of the rehydroxylation (RHX) technique is perhaps one of the most exciting developments in archaeological science since the introduction of radiocarbon dating in the 1950’s for organic material.

This is how it works: all fired clay – bricks, tiles, pottery – expands on aging due to the update of environmental moisture. The long-term moisture expansion of bricks has been known to structural engineers for some time, as it is the cause of cracking in brick masonry due to expansive stresses. This long term expansion is due to rehydroxylation, a super slow, progressive chemical recombination of environmental moisture with fired-clay material. Research in rehydroxylation has rapidly evolved from the prediction of expansion in structural masonry to the development of a potential dating method for archaeological ceramics. The process of Rehydroxylation (RHX) is defined as the chemisorption of atmospheric water by fired clay ceramic material which proceeds by ultraslow, nanoscale solid-state transport (single file diffusion) into the body of the clay. Ceramic material is very porous so water as vapour readily permeates it. As water molecules chemically combine with the ceramic it gains mass. However this long-term uptake of water is both very small and gets progressively slower. This means that the water demand for RHX is extremely modest.

A piece of 18th century Coalport bone china, as seen through a microscope, this shows how porous ceramic is, particularly when compared to the glaze © Dr. Robert Freer

The rate of RHX is described by a (time)1/4 power law, this means that it is a super-slow reaction. Two distinct stages are seen when ceramics, both in the freshly fired state and after reheating, react with environmental moisture. The brief first stage, which lasts only for a few hours, represents the sample cooling down from 500°C and coming into equilibrium with the ambient conditions. The second stage is where rehydroxylation is taking place and we believe that this process continues indefinitely. 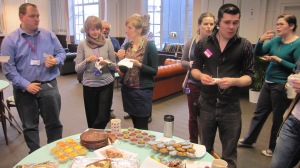 Staff at Manchester Museum at the Comic Relief afternoon tea

This photo shows some of my colleagues tucking into cakes and assorted pastries at the afternoon tea in aid of Comic Relief and Red Nose Day. We made cakes and biscuits inspired by archaeology, archaeological sites and the collections more generally. My own humble offering was inspired by the Manchester wordsquare with its inscription ROTAS OPERA TENET AREPO SATOR.

The shortbread biscuits with piped chocolate icing lettering were well and truly knocked into a cocked hat by the ancient Egyptian hippo cake modelled on a predynastic pot in  the Museum collection. 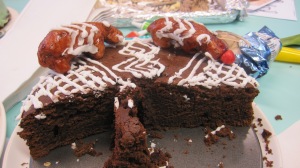 But pride of place has to go to a cake that sadly suffered a mishap en route. Kate’s display case cake was a spectacular creation. So good was it that when I saw it later I actually photographed the pile of the broken pieces of the gingerbread sides of the cake in the mistaken impression that it was the cake itself! The rostrum of the saw-fish was inspired. 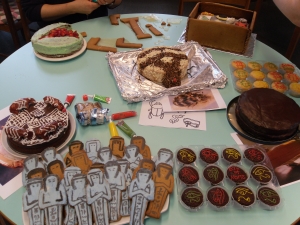 Abby emailed later to say that we’d made an incredible £114.04 for Comic Relief!

Bronze figurine of the god Mithras in the Manchester Museum collection

Over the last week I’ve done a number of object handling sessions for 1st year Classics students at the University. A group came over this morning with their tutor Dr Roberta Mazza, who is a Lecturer in Classics and Ancient History. I focused on the Manchester word square , the five word puzzle in which the letters PATER NOSTER and the letters A and O have been detected.

Word square or palindrome from Manchester (photo by Alan Seabright)

The Latin for ‘Our father’ from the Lord’s prayer and A and O for Christ’s ‘I am the beginning and I am the end’ appear to be deliberate. We discussed whether the word square should be regarded as the earliest evidence of Christianity in  northern Britain or whether it is just a doodle or piece of graffiti scratched onto the side of a pot.

The word square is on display in our new Ancient Worlds displays so I got out a replica for Roberta and her students to have a closer look at. We talked about the different interpretations and explored other evidence for Christianity in Roman Britain. I mentioned how previous research had attributed the destruction of temples dedicated to the god Mithras to Christian communities. So, if what looks like a deliberately damaged Mithraic temple is found, one might infer the presence of a Christian community nearby, which is a more negative form of evidence of adherents of the religion. This can be found in Charles Thomas’ book on Christianity in Roman Britain to AD 500 (Batsford, 1981). Early Christians found Mithraism’s similarity to Christianity too close for comfort (both have as a central figure a man who undergoes a trial or an ordeal that symbolises the wider struggle between good and evil).

By chance we happen to have a rather interesting bronze figurine (see the photo above) depicting Mithras with an inscription. Sadly we don’t know where it comes from but it was great to get out the figurine as a tangible piece of evidence of the Mithraism.

It is interesting that remains of a Mithraeum was found at Hulme in Manchester in 1821 but we don’t know enough to say whether it had been destroyed by a Christian mob or not. Perhaps if we did have that evidence – as apparently survives on Hadrian’s Wall and at the Walbrook in London – we might have another tentative piece of evidence for Christianity in Roman Manchester.

Of course if the word square is simply the result of someone with too much time on their hands, it is a huge coincidence that the words PATER NOSTER and the letter A and O can be sifted out of the 25 letters that make up the 5 word palindrome. But then an American commentator has noted that Ronald Wilson Reagan is an anagram of ‘Insane Anglo Warlord’. The letters of ‘President Clinton Of the USA’ when rearranged give you ‘ To Copulate he finds interns’! I mean, you couldn’t make this up could you?

The rearrangement of the letters that make up his name must be just coincidence. So extracting PATERNOSTER out of the word square is just another seemingly unlikely coincidence, though I suspect conspiracy theorists might beg to differ.

This photo of filming Craig Brisbane was taken on Menaka Munro’s mobile phone earlier. I was balanced precariously on an inflatable ball whilst I asked Craig questions about what it was like to discover the Manchester wordsquare.

In the 1970s Craig was working on a dig in the centre of Manchester when he found a piece of pottery with some letters scratched on the surface. Most of the professional archaeologists had gone off site and he had to find someone who could look at the discovery quite quickly. Dr Denise Kenyon cleaned the piece of pottery and revealed some mysterious letters. They were part of a five word word-square in Latin reading:-

Which is roughly translated as ‘Arepo the sower guides the wheels with care’. The words can be read up and down and left to right (try it and see).

This may have a meaning akin to a line from a modern nursery rhyme but the letters could be deconstructed and reassembled to form two lines reading PATERNOSTER that crossed on the letter N. This of course is ‘Our Father’ or the start of the Lord’s Prayer. The letters that are left over are A and O. These are Alpha and Omega, the first and last letters of the Greek alphabet. In the Revelation of St John in the Bible Jesus said “I am the beginning and the end”.

The letters of the wordsquare re-arranged

This seems to be a puzzle with a hidden religious meaning. It has been suggested that this might have been used by Christians to advertise their presence to fellow believers at a time when the Church was being persecuted by the Roman authorities. And here it was in a closely-dated layer in a room of a building off the road leading into the Roman fort of Manchester. The layer dates from the 180s AD.

This is very early for Christianity in northern Britain and Craig described the sense of mounting excitement as team members tried to contact the site director, the late Prof Barri Jones, who was away at a conference. And then how they took the piece to show to the Church of the Hidden Gem in Manchester, where the priest knew what it was straightaway.

Senior members of the Church visited the site to see where the wordsquare had been found. Craig described the diggers’ embarrassment because they didn’t know how they should greet the Bishop of Salford but they followed the example of a cameraman who was filming the occasion and bent the knee and kissed the ring on the Bishop’s finger. 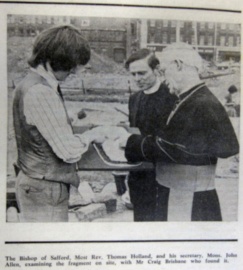 Craig Brisbane and the Bishop of Salford from Observatore Romana

Craig showed us other material and kindly presented a copy of the Observatore Romana issued at the passing of Pope John Paul I which took place at the time of the discovery of the wordsquare. There in the pages amongst messages of condolence from heads of state from all around the world was a full page on the Manchester discovery with a photo of Craig himself talking to the Bishop of Salford.

It seems churlish to say that there is another interpretation which says that this is not necessarily Christian at least at the time it was deposited and it is more likely to be a kind of game or pastime. The creation of wordsquares using words with increasing numbers of letters seems to have fascinated the Romans. Later, it is argued, another, Christian meaning was teased out of the wordsquare.

We are filming short interviews with people who are contributing to the galleries or who have made exciting discoveries or who have their own collections to go in the Ancient Worlds displays that open on October 30th 2012. If you’d like to contribute do please get in touch with the Manchester Museum (bryan.sitch@manchester.ac.uk).