Ray Laurence’s book Roman Passions A History of Pleasure in Imperial Rome (Continuum, 2009) has a very useful section on Saturnalia, which featured in the Ancient Worlds blog of 8th December. Laurence discusses the activities that took place during the festival including the exchange of presents, and (from the early 1st century BC) drinking on an empty stomach together with its consequences.

Whilst drunkenness and vomiting might not strike us as one of the categories of new forms of pleasure during the Roman Empire, as Ray Laurence explains, it did come to characterize the mid-winter festival of Saturnalia. The extensive trade networks of the time made available a range of products such as high-quality wine and other commodities, some of which appear to have been specially imported with the Saturnalia in mind. 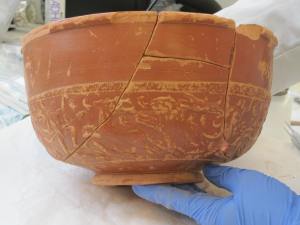 Saturnalia gift? A Roman samian bowl similar to those found in a crate at Pompeii

Laurence suggests a novel explanation for the crate of northern Italian lamps and southern Gaulish samian ware vessels discovered in the ruins of Pompeii. The 76 pottery bowls of two very similar types were not intended for resale in a local shop and Laurence asks what the owner would do with such a uniformity of products. Was the crate a box of gifts awaiting redistribution at a festival such as Saturnalia? And these are only the commodities that happen to survive archaeologically. Rich foods and drink were also imported and consumed in large quantities, though they have left few traces save for their packaging.

Given the over-indulgence that took place during the festival, it is easy to see how drinking too much and making oneself feel ill came to be associated with Saturnalia. Laurence writes about how the action of vomiting at this time of the year was seen as potentially beneficial to health. Though the vomitorium or room in which to vomit is now regarded as mythical, it is known that a variety of products were taken to either prevent or induce retching. Of course vomitoria did exist at amphitheatres and stadiums, and were designed to allow large crowds to leave the premises quickly and safely.

We are no strangers to seasonal unpleasantness ourselves, and not always self-inflicted. Today’s Daily Telegraph has a Matt cartoon on the front page showing someone opening one of the dates on a ‘Norovirus Advent Calendar’  to reveal a man being sick (see http://www.telegraph.co.uk/ of 19th December 2012). This rather tasteless allusion to recent high levels of mid-winter vomiting virus (900,000 people have been infected) is another unconscious and indirect echo of the ancient Roman festival of Saturnalia…