The week kicked off first thing on Monday morning with a Roman glass ‘gig’ ,playing to Manchester Museum’s Visitor Services Assistants in the third of the Ancient Worlds galleries.

We started off in the Egypt gallery where I showed the assistants some pieces of 19th Dynasty ancient Egyptian glass dating from the time of  Ramesses II (1295-1186) to make the point that although glass starts off, as so many other things, in Mesopotamia, knowledge of the craft spread to Egypt, where the glass making industry had the advantage of extensive natron or sodium deposits that were used as a flux in the manufacture of glass.  Glass was popular with the elite ruling class of the pharonic court.

An unguentarium in the hand…

We then moved upstairs to consider the later history of glass, when it was taken up by the Romans. The Romans annexed Syria in 63 BC and skilled workers moved to Italy in the 1st century BC. The invention of quicker and chepaer ways of working glass by glass-blowing, the Roman peace (pax Romana) established under Augustus following the Civil Wars, the resumption of long distance trade and return of business confidence, all stimulated the glass-making industry. Mass production of glass vessels became possible in a fraction of the time it had taken previously thanks to the glass-blowing technique. Strabo refers to a glass vessel costing a copper coin (Geographica XIV.2 ). The equivalent pieces in glass came to replace a wide range of ceramic vessels. In many ways glass vessels were  preferred because they were clean and hygienic, didn’t smell and didn’t affect the taste of foodstuffs or beverages that were stored or served in them. Despite the widespread recycling of broken glass which was melted down and re-used (Martial Epigrams 1, 41), the generic name for Roman rubbish comes from the Latin for broken glass ( vitrea fracta for ‘rubbish’ in Petronius’ Satyricon 10) so sites must have been littered with broken shards. 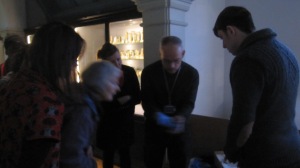 VSAs in the Ancient Worlds gallery

Most of Manchester Museum’s Roman glass collection consists of small perfume bottles or unguentaria that are most likely to have come from tombs in the eastern Mediterranean. Typically they are tall and narrow in shape which helped prevent evaporation of the contents. Having a wider or bulbous base helped to keep the centre of gravity low down and so prevent the vesels falling over accidentally. They are sometimes referred to as lachrymatories after the erroneous belief that they were used by mourners to gather their tears and placed in the tomb. However, tests of surviving  substances in the vessels have shown them to be oil-based perfumes and unguents. Some vessels even have a pronounced ‘kick’ underneath to reduce the volume of the contents so that only a token offering was made by the mourners.

Sadly there are no examples of early mosaic glass nor the later cage-glass vessels in the Manchester collection. I finished off by showing the VSAs the glass inkwell that I have already discussed on this blog. Everyone clapped when I finished so I guess a good time was had by all. Thank you to Rowena who took the photographs.