Manchester Museum has a very large and varied collection of prehistoric lithics collection, including hundred-thousand-year-old Palaeolithic hand-axes from southern England, Mesolithic microliths from the Pennines around Manchester,  neolithic rough-outs from so-called ‘axe-factories‘ in Great Langdale in Cumbria and Craig Llwyd in Wales, Bronze Age stone mauls or mining tools from Alderley Edge in Cheshire, more recent material collected from indigenous peoples in the Americas, and Australia, and stone tools, flint flakes and other objects of all periods from the UK, Europe and other countries around the world.

The richness of the Museum’s lithics collection is due to the first curator, William Boyd Dawkins (1837-1929). Though primarily a geologist, Dawkins was an expert on the identification of prehistoric animal remains and wrote what was regarded at the time as the text-book about cave archaeology called Cave Hunting (1876). Dawkins is perhaps best known for work at Creswell Crags, conducted, at least initially, with Revd Magens Mello and Thomas Heath. Star finds include Neanderthal stone choppers and a beautiful Font Robert point dating from around 29,000 BC.The Museum has a very important archive of finds, photographs and other documentation relating both to these Victorian excavations and to later work undertaken by A.Leslie Armstrong (1878-1958). 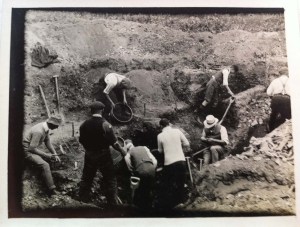 Dawkins’ successor at the Museum was J.Wilfrid Jackson (1880-1978). Like Dawkins, Jackson had wide-ranging interests, excavated prehistoric sites and published important regional summaries of lithic discoveries. As a result of the collecting activities of Dawkins and Jackson, the Museum’s archaeology collection contains large quantities of flint and other stone implements, not to mention prehistoric metal, pottery, bone and antler objects. They built up collections of stone objects, including fakes, as reference material and for teaching purposes. One individual by the name of Edward Simpson alias ‘Flint Jack’, ‘Bones’ or ‘Fossil Willy’ was notorious for selling his dodgy flint artefacts to gullible collectors and museum curators, served time in prison and ended his days demonstrating flint-knapping for  gentlemanly antiquarian societies.

Many of these objects are displayed in the Museum’s Ancient Worlds galleries, where, thanks to the range of disciplines represented in the collection it has been possible to show axes with ornate binding and rafia sleeves for comparison from New Guinea and Borneo – where the Stone Age finished as recently and precisely as 10am on 8th March 1933 – from the Living Cultures collection.

The intellectual focus of the Museum displays shifted in the latter part of the 20th century in favour of the Classical world but research on the lithics collection continued. For instance, many of the Museum’s stone axeheads were sampled petrologically during the 1970s and 1980s and the results published in Stone Axe Studies; researchers such as the late Roger Jacobi (1947-2009) carried out detailed work on the Creswell Crags archive, even identifying joins between fragments of the same implement in different museums; and an important landscape study of Alderley Edge was undertaken by Prof John Prag of Manchester Museum. The Museum also subscribed to excavations in the Middle East and received a proportional share of finds including lithic artefacts from sites such as Abu Hureyra in Syria, Jericho on the West Bank, and from the excavations at Mount Carmel in Northern Israel directed by Dorothy Garrod (1892-1968).

With the redevelopment of the new Ancient Worlds archaeology galleries, more of the Museum’s historically important lithic collections was put on show. The recent updating of the National Curriculum so that it includes the Stone Age offers another opportunity to work with teachers and school groups to interpret this material for the younger generation. Meanwhile new digital technology and augmented reality are providing more stimulating ways of engaging with the artefacts.

We will be having a special activity day about flint knapping at the Museum on Wednesday 18th November if you want to see how it’s done and maybe have a go yourself.

W.Boyd Dawkins (1876) Cave Hunting: researches on the evidence of caves respecting the early inhabitants of Europe (London, Macmillan and Co.).

Prehistory Makes a Come Back

Twilight session on Prehistory with teachers

One of the surprises in the  National Curriculum has been the inclusion of Prehistory. For the first time teachers find themselves in the position of being asked to teach a subject they have not had to teach for many years but one which presents certain challenges. For me this was summed up at a recent meeting at the Natural History Museum in connection with a proposal to tour elements from its Ancient Human Occupation of Britain (AHOB) exhibition to partner museums. One of the representatives from Creswell Crags said that the Visitor Centre there had received an enquiry from a worried teacher who said she knew that Creswell was an Ice Age site but she had to teach the Stone Age and could they offer any advice and recommend a site to visit with school pupils…

So when Debbie Doran from Manchester Museum’s Education team asked me to support what is sometimes called a ‘twilight session’ on Prehistory  for Manchester teachers I was more than happy. Manchester Museum is very well-placed in this respect to offer this kind of support because the first curator, William Boyd Dawkins (1837-1929) was an expert on the identification of prehistoric animal remains and wrote the text-book about cave archaeology Cave Hunting which was published in 1876. Dawkins’ successor in this field, J.Wilfrid Jackson (1880-1978) too was fascinated by the subject. As a result the archaeology collection is stuffed with flint and other stone implements, not to mention prehistoric metal objects, pottery, bone and antler. The intellectual focus may have shifted in the latter part of the 20th century in favour of the Classical world but the prehistoric collections remained, quietly waiting for their moment again in the sun. And maybe this is it. 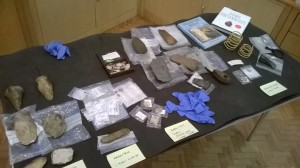 A selection from the prehistoric archaeology collection at Manchester Museum.

I brought out a selection of material from the Museum’s prehistoric lithics collection  including some Palaeolithic hand-axes from southern England from several hundred thousand years ago, some Mesolithic microliths, some Neolithic stone axe rough-outs from Cumbria, replicas of the beautiful early Bronze Age gold armillae or armlets from Malpas in Cheshire and an Iron Age bridle bit from Bigbury Camp in Kent. One of the difficulties the teachers face is that when they have to teach the Stone Age there is almost an expectation that they can take a box off the shelf and teach the subject in the same way they would with a box of ancient Egyptian or Roman objects. But prehistory lasts (in Britain – as the wonderful temporary exhibition at the Natural History Museum makes clear) for the greater part of a million years. And which bit of the Stone Age should you concentrate on? It’s sobering to think that when the Dutch arrived off Easter island in 1722, the inhabitants were using stone implements. In fact the Stone Age in the New Guinea Highlands ended at 10am on 8th March 1933 when gold prospectors landed there in a plane.

Even if we just look at the Stone Age in Britain, the timescale is incredibly long and within that million years all sorts of changes have taken place. Ice Ages have come and gone with ice-sheets over a kilometre thick in places. Sea levels have fallen about 100 metres lower than they are today before re-establishing themselves. Britain has at times been linked to the European continent by a land bridge across what is now the North Sea and then cut off from it. Many exotic animal species have lived in Britain at times when the climate was much warmer: hippopotamus and hyena are known from their bones and teeth to have lived at Creswell Crags in Derbyshire, only an hour away from Manchester.

Over such a long period of time it is not surprising that the kinds of human beings living in Britain have changed too. In the dim and distant past human beings lived here who, we cannot be absolutely sure of this, were of the species Homo erectus or  perhaps ancestors of Homo heidelbergenis. Later Neanderthals lived here. They were like us but different with stocky frames, short limbs and prominent brows, apparently adapted to living in a cold climate. It is mind-boggling to think that civilisation in the Middle East started around 3000 BC but that Neanderthals colonised Britain many times between 400,000 and 40,000 years ago. The subject is explored in the Natural History Museum’s Britain One Million years of the Human Story. There’s a piece on this in the NHM’s magazine ‘evolve’ (issue 18, winter 2014 – now that’s planning ahead!) featuring interviews with lead scientist Prof.Christopher Stringer and lead exhibition designer Elin Simonsson (pp.6-11).

Neanderthals from the AHOB exhibition

As Christopher Gosden points out in his little book called  Prehistory A Very Short Introduction (2003) ‘part of learning about the past is an unlearning of the present’ (p.26).  So it was not entirely surprising to hear one teacher say that Stone Age people used flint until they realised it didn’t work for them and they invented something better like bronze and then iron. The relationship between technological development and ideas of what constitutes progress, influenced as it so often is by Darwinian evolution, is so pervasive that we really need a course along the lines of the seminar Stephen Welsh, Curator of Living Cultures, and I regularly offer to university students which explores this question. That’s no fault of the teachers of course but it does mean confronting some rather deep philosophical questions before we reach for the box of teaching objects labelled ‘Prehistory’.