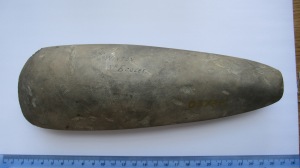 Neolithic axehead from Winton near Eccles (0.3735)

Day just got off to a great start. I was taking a seat at the staff presentation earlier this morning when Lindsey Loughtman called me over to say she’d found an object in the Botany collection that certainly wasn’t natural history and was it archaeology? You bet yer!

I recognised it immediately as a neolithic ground and polished stone axehead dating from about 3500-2000 BC. Not only that, it had the original ‘O’ number museum reference written on it together with the name of the place where it was found: Winton near Eccles.

The axehead was found in June 1922 by Mr. James Caine, who saw it lying on top of spoil thrown out of a drainage trench cut in the soil about the centre of a newly made roadway named Westwood Crescent near Parrin Lane.

The axehead was presented to Manchester Museum by the Health Department of Eccles Corporation.

The axehead has been sampled petrologically. You can see the thin slot cut in the side of the axe in order to provide a thin section to be used for identification. The material was identified by J.W.Jackson of the Manchester Museum and W.B.Wright of the Geological Survey as group VI greenstone, a kind of rock known as volcanic tuff. It is fine grained because it is made up of the compacted dust and grains from volcanic eruptions millions of years ago. It shares characteristics with glass and flint which means it can be shaped by flaking because it will break in a predictable way. The source material outcrops in Langdale in the Lake District and the Pike O’Stickle quarry is famous for its breath-taking location. The prehistoric axe-makers made rough-outs and then ground and polished the rough-out until it was smooth and of a regular, symmetrical shape.

I wanted to display it with other Manchester neolithic discoveries in our new Ancient Worlds displays which opened last autumn but unfortunately I couldn’t locate it. It was in the Botany department all the time! I can only speculate that perhaps the Curator of Botany years ago was running some sort of seminar on pollen analysis and wanted to show the impact of the felling of trees by people in prehistory. If that is the explanation, why use what must be one of the finest examples of a neolithic axehead in the collection, if not all of Manchester?

This is still a wonderful surprise and it’s great to be reunited with an old friend. Thanks Lindsey!