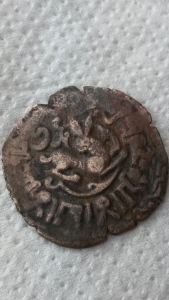 With the hotly anticipated seventh series of HBO’s Game of Thrones about to show it seems opportune to flag a coin in Manchester Museum’s numismatic collection with a passing link to the terrifying Dothraki horseman who began their long-awaited sea crossing to Westeros at the end of the last series. We have previously had occasion to comment on the use of ancient and medieval history and archaeology in the popular series.

The historical context for this coin is rather complicated but here goes:-

The story really begins with Yissugei, father of Jenghiz or Gengiz Khan, who was leader of one of the tribes on the northern boundary of the kingdom of China. Yissugei asserted his independence from Chinese influence and was succeeded by Temujin (the name of Jenghiz or Chinngiz Kahn). Temujin spent 30 years uniting the Mongol tribes and in 1206 AD claimed the title of ‘very mighty king’.

By the time Jenghiz or Chinngiz Khan died in 1227 AD, aged 64, the Mongols had conquered a large part of Central Asia, and the Mongol Empire stretched from the Yellow Sea to the Crimea. The empire was created by an army of cavalry using bows and arrow but it was a force that also had access to sophisticated Chinese siege technology. The Mongols were irresistible. Their conquests have been referred to as an ‘appalling avalanche of destruction’ (J.J.Saunders, A History of Medieval Islam 1965, repr. 1982, p.171). The Mongol leadership demanded not friendship and alliance but abject submission (p.180). They are presumably the inspiration for J.R.R.Martin’s savage horse-riding Dothraki in Game of Thrones. It is symptomatic of how savage they are that when asked what is the Dothraki word for thank you, one of the characters replies pointedly, “There is no Dothraki word for thank you”.

Now I don’t know whether the Mongols  have a word for thank you but the name used for the Mongol tribes over which Jenghiz ruled is ‘the Golden Horde’, which subdivided into ‘the Blue Horde’ and ‘the White Horde’, each ruled by one of his sons. Hulagu, second brother of Mangu (with Khubilai Khan), were all grandsons of Jenghiz Khan. In 1258 the Mongols under Hulagu captured Baghdad, one of the great cities of the Islamic Caliphate, plundered it, slaughtered the Muslim population (800,000 is the lowest estimate) and killed the last Caliph, Al Mustasim, by trampling him to death.  The sacking of Baghdad put an end to 500 years of the Abassid caliphate. Hulagu was bitterly hostile to Islam. Osama bin Laden compared the US led invasion of Iraq to the Mongol conquest of the 1250s.

Of course, the Mongols were not the only people on horseback that spring to mind in relation to the Dothraki. In yesterday’s  Telegraph there was an article about the British Museum’s forthcoming Scythians exhibition, again making a connection with J.R.R.Martin’s fearsome horse riders. The Huns are another  example. However, given what the Dothraki are capable of, in terms of capturing and destroying cities and carting off their statues to their own city of Vaes Dothrak, the Mongols seem to offer the closest parallel, although all these peoples undoubtedly induced terror because of their tough way of life and their brutality.

Hulagu established a dynasty in Persia that became the Ilkhanid dynasty  – the Mongols of Persia. Ilkhan means a provincial khan. Further Mongol extension to the west was stopped by the Mamluks of Egypt at the battle of Ain Jalut or Goliath’s Spring (September 1260). Ain Jalut was one of the world’s decisive battles yet it is relatively little known in popular culture. Had the Mamluks been defeated Islam might well have been destroyed as a religion.

Coin of Uljaitu with Mongol and other script legend

In the numismatic collection of Manchester Museum is a coin known as a copper fals, issued in the reign of Arghun ibn Abaga (683-690 = 1284-1294) or Uljaitu ibn Arghun (704-716 = 1304-1316) showing a hare running to the right with the Kalima, the Islamic statement of faith (‘there is no God but Allah and Mohammed is his Prophet/Messenger’). The reverse shows lines of writing. This is Mongolian with Uyghur and Phags-Pa script and can be seen on most of the Ilkhanid coins. It is a statement of loyalty to the ancestors. However, the dynasty was established in the Middle East where Arabic was and remains the daily language for many people. Arabic was used on the coins because the Mongols still found coinage useful as a medium for communicating the power of the state.

On the reverse is:-

For a good diagram explaining this, See:-

It is often said that Islam prohibited pictorial art but it is clear that this was not enforced rigidly and attitudes were more tolerant at different times. The Mongols, certainly, would have been familiar with hares from seeing them on the Asian steppes. A hare is sometimes seen on Islamic pottery of earlier and later date. The Mongols were influenced by Nestorian Christianity in the early years but later accepted Islam as their religion. Europeans tended to regard Nestorianism as heretical for its beliefs about the nature of Jesus. Uljaitu, the Ilkhan of Persia, in whose name this coin was probably struck, may have been Christian but converted to Islam.