Head of horse or camel rider from the Fragmentary Ancestors exhibition

With little more than a week to go before we open our new temporary exhibition, Fragmentary Ancestors Figurines from Koma Land Ghana, on 25th October there is a real sense of expectation and anticipation building at Manchester Museum.

Work on this project began about a year ago when it was decided to put on an exhibition featuring the results of archaeological fieldwork in Koma Land in Northern Ghana involving the University of Manchester, the University of Ghana and the Ghana Museums and Monuments Board (GMMB). In May, Sam Sportun, Senior Conservator at Manchester Museum, flew to Ghana to pack a selection of the figurines for exhibition in Manchester. Since that time Prof Tim Insoll and the Ghanaian partners wrote the text for the exhibition and the accompanying  booklet, and FDA Design Ltd designed the new displays.

Head of figurine from Koma Land

This exhibition is the first ever officially approved showing of the clay figurines, which were made by a previously little-understood people in Koma Land in Ghana in West Africa. The figurines are often fragmentary and depict stylised two-headed creatures, bird figures, and animals. They are believed to represent the ancestors. It is possible that some had liquid offerings or libations poured into channels in the figurines, and that some might have been linked with healing and medicine. Scanning is now being carried out to study these channels in detail and to try and identify any substances that survive in them.

Head of man wearing a cap from Koma Land

The figurines were discovered during archaeological fieldwork directed by Professor Ben Kankpeyeng (University of Ghana) working with Professor Tim Insoll (University of Manchester) and the Ghana Museums and Monuments Board (GMMB). The Koma figurines have been dated to between approximately 500 and 1300 AD.  This corresponds broadly-speaking to the early to mid Medieval Period in Britain.

We don’t know a great deal about how the figurines were used but it would appear that they were used in special ceremonies and rituals in which the sprits of the ancestors were invoked. In the course of these ceremonies the figurines were deliberately broken. The fragments are often found in mounds, possibly because they were felt to have residual power and had to be disposed of carefully. 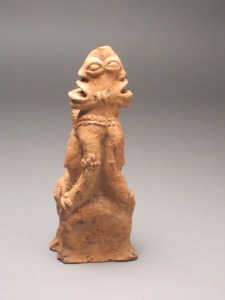 As will be clear from the photos the figurines are full of character and have tremendous presence. The people who made the figurines were very skilled. For that reason the Koma Land figurines have generated considerable interest amongst collectors on the international art market with the result that the mounds where the figurines are found have been looted by treasure hunters. Of course, once removed from their original contexts and localities and the relationship between the objects as archaeological finds destroyed, a huge amount of invaluable information is lost. The GMMB and the University of Ghana have been working with local people to explain to them the cultural importance of the figurines and to support them in protecting the mounds. Though other figurines have been displayed outside Ghana these are the first to be exhibited abroad with the approval of the Ghanaian authorities. After the exhibition closes the figurines will be put on display at the Museum in Accra in Ghana.

The Fragmentary Ancestors exhibition opens to the general public on 25th October and runs until 5th May 2014.

You can read a review of the exhibition in the Journal of Museum Ethnography:-

Alan Seabright took the photographs for the exhibition and exhibition booklet (available price £3.50 from the Museum shop).

Sampling of the Koma Land figurines by Dr Heather Robinson was published in 2017.