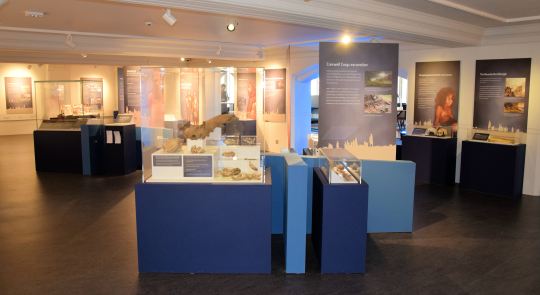 Preparations for Manchester Museum’s newest temporary exhibition are well in hand and we have spent the last few days installing Humans in Ancient Britain: Rediscovering Neanderthals ready for the Private View opening on the evening of 21st April. It must be a good 18 months or so since the Natural History Museum contacted us to ask if we were interested in taking touring exhibits  from the NHM’s One Million Years BC exhibition. At the partnership meeting that followed we chose the ‘Neanderthals and modern humans’ option, which included a fine hand axe from Kent’s Cavern, a Neanderthal skull from Swanscombe, a bone harpoon and a perforated badger tooth made by anatomically modern humans.

This is a topic that has considerable resonance for us at Manchester Museum because we have a large collection of material from excavations of the caves at Creswell Crags. The first Curator of Manchester Museum, William Boyd Dawkins (1837-1929) joined Reverend Magens Mello and Thomas Smith from Derby Museum on the site in 1876. In many ways Dawkins was the ideal person to take part because he had written a book called Cave Hunting, which assessed the importance of cave deposits in preserving evidence from earlier times, but he fell out with Smith and there was controversy over some of the finds from the excavations.

Watercolour of the Crags by Revd. Magens Mello

Despite these differences,  Dawkins’ involvement in the project resulted in Manchester Museum acquiring a sizeable portion of the finds. Manchester’s collection of artefacts and specimens from the site increased further when A.Leslie Armstrong excavated at Creswell Crags during the 1920s. Ever since, Manchester Museum has been a port-of-call for anyone wanting to research the mid to late Palaeolithic, broadly the period of time from the onset of the last Ice Age when Neanderthals used some of the caves about 50,000 years ago to the melting of the ice sheets just over 10,000 years ago.

So right from the start, we had it mind to supplement the exhibits we would borrow from the Natural History Museum with material from our own collection. We also saw an opportunity to draw upon recent research on Neanderthals at the University of Manchester. We approached a number of  academics working in different parts of the campus and asked them to contribute to the exhibition project.

Prof Andrew Chamberlain in person and on screen in the exhibition

Dr Michael Buckley (FLS) provided information on identifying bones using a technique called proteomics. Prof Andrew Chamberlain (FLS) kindly agreed to be interviewed about his work on the excavation of a Victorian spoil heap at Creswell Crags.  Prof.Matthew Cobb (FLS) helped us with Neanderthals and the sense of smell; Dr Chantal Connoller (Archaeology) on the technology of Neanderthal stone tools; Dr David Kirby (FLS) discussed early images of reconstructions of Neanderthals; PhD researcher Tom O’Mahoney kindly provided obtained 3D prints of Neanderthal bones displayed in the exhibition (the 3D prints are courtesy of the Centre for Digital Fabrication). Last but not least Prof. Jamie Woodward (Geography) provided information about the volcanic ash evidence at Crvena Stijena in Montenegro. We were also supported by Creswell Crags Visitor Centre, which kindly provided access to images and film footage. 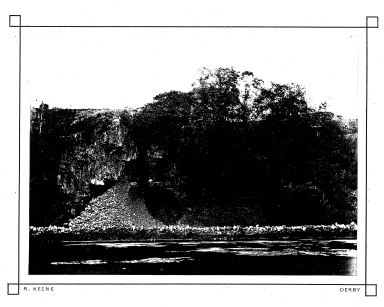 So what we have is a composite exhibition that takes the Natural History Museum’s touring exhibits, supplements them with material from Manchester Museum’s collection and adds the latest in scientific understanding about Neanderthals in so far as University of Manchester academics and researchers are involved.

Enormous progress has been made in the 150 years or so since Boyd Dawkins  excavated at Creswell Crags, in excavation techniques, in dating and analysing archaeological material from this period, which is known as the Middle Palaeolithic and sometimes the Mousterian. Unfortunately it is too remote for radiocarbon dating but new techniques such as proteomics, identifying bones from their proteins and of course DNA analysis are changing what we know seemingly on a weekly basis. In the most recent New Scientist (23rd April 2016) there’s an article about our DNA inheritance: Neanderthals gave us tolerance to cold and certain forms of addictive behaviour, which millenia later would find an outlet in smoking.

The Singing Neanderthals by Steven Mithen

I wonder what addictive behaviour the Neanderthals were prone to? Steve Mithen famously wrote a book called The Singing Neanderthals The Origins of Music, Language, Mind and Body (2005) after the discovery of a supposed flute made out of a bone from a Brown Bear found at an eastern European site (we show a postage stamp with a picture of the bone in the exhibition). Somehow The Chain Smoking Neanderthals or the Gum Chewing Neanderthals doesn’t have the same ring to it.

Neanderthals had thick brows, receding chins and large wide noses, and no doubt an attitude to go with it. In The Neanderthals Rediscovered: How Modern Science is Rewriting their Story, Dimitra Papagianni and Michael A. Morse comment that if you’d made a disparaging remark about them they’d probably have ripped your arm off!

So whist we like to think of ourselves as superior (purely because by a fluke of nature, sheer happenstance, we survived and they did not), compared to Neanderthals, modern humans were Johnny-come-latelies. The Neanderthals survived for several hundred thousand years in Europe and successfully coped with periods of intense cold. Modern humans have only been around a fraction of the time and already we need another planet because our way of life isn’t sustainable.

The Neanderthals’ bodies were shaped by evolution to better withstand the cool temperatures: short limbs, low body surface area compared to their volume to minimise loss of heat, and barrel-chested. Their skeletons were robust and they must have been incredibly strong.  PhD researcher Tom O’Mahoney’s research, featured in the exhibition, shows Neanderthal children developed faster than modern human children.

In the Rediscovering Neanderthals exhibition there are a number of photographs of models of Neanderthals made by Elisabeth Daynes to show that although Neanderthals  were different from us they were also very similar, a far cry from the early depictions of Neanderthals, showing them as savage ape-men. We also show a number of images derived from popular culture. In anticipation of life post-exhibition, some of my colleagues already have their eye on The Neanderthal Man film poster. Of course this is the image that it has suited film directors to promote in order to be sensational but Neanderthals  cannot have been so very different from us. We know that our ancestors interbred with Neanderthals when they encountered them in the Middle East and in Siberia, where the latest evidence has been found for another previously unsuspected and close relative of ours, called the Denisovans.

Why Neanderthals died out is still a mystery. Darwin in On the Origin of Species (1859) stated that ‘species in closest competition will generally press hardest on its nearest kindred, and tend to exterminate them’. So far evidence for genocide hasn’t been found. Perhaps a combination of cold temperatures and the arrival of modern humans was too much for the Neanderthals. Perhaps we passed on  diseases from the Tropics to which they had little or no resistance. Perhaps diminished in numbers the remaining Neanderthals were finally absorbed into the human gene pool, in the same way that Scottish wild cats by interbreeding with domestic moggies are at risk of becoming extinct. There is evidence to support this: people of non-African descent have up to 4% Neanderthal DNA: so there’s direct evidence of Palaeolithic hanky-panky!

Humans in Ancient Britain: Rediscovering Neanderthals opens to the public on Friday 22nd April and runs until 13th July 2016. Manchester Museum is open 10am until 5pm.