Some time ago Dmitri Logunov, Curator of Entomology at the Manchester Museum, and Marion Endt-Jones, who is curating the Coral: Something Rich and Strange exhibition (29th November 2013-16th March 2014), visited the archaeology store to select objects. This might seem a bit counter-intuitive because we don’t really have anything made of coral in the archaeology collection but it turned out there was a really good link with the ancient Greek and Roman collections in the form of representations of Medusa. The connection between coral and Medusa is a passage in Ovid’s Metamorphoses ((4.782-86).

The Greek hero Perseus, with the help of a cap that made him invisible, a sickle-shaped sword, a special satchel, and winged shoes, given to him by the god Hermes, chopped off Medusa’s head and escaped. A copper alloy figurine in the archaeology collection, apparently depicting the Hermes, shows the god wearing a winged helmet and sandals, and carrying a bag or purse (1986.13). Or is it Perseus?

Having succeeded in decapitating the snake-headed Medusa, who turned all who looked at her to stone, Perseus rescued the beautiful Andromeda from the sea monster that threatened her. After claiming her hand in marriage, he washed in the sea, accidentally causing the birth of coral by setting down Medusa’s head on the seashore: the seaweed absorbed the Gorgon’s fading power to petrify, and turned into coral.

This reminded me of a holiday in Turkey a few years ago. At the Temple of Didima, near Altinkum in south western Turkey, there are some wonderful representations of Medusa. 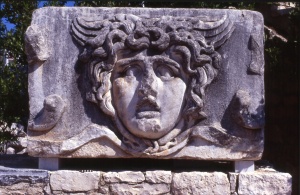 Medusa at Didima, Turkey. Note the wings above the forehead

A number of objects in the Manchester Museum’s archaeology and numismatic collections relate to the myth of Perseus, Medusa and the gorgoneion, the severed head of Medusa that Athena put on her shield to terrify her opponents in battle.

A Roman Republican denarius issued by the moneyer L. Plautius Plancus in 47 BC is justly regarded as a masterpiece of the ancient die-cutter’s art. It shows the facing head of Medusa on the obverse: the wide, staring eyes, together with hair in the form of wriggling snakes, provides the most dramatic image of the monster on a coin.

An ancient Greek terracotta on display in the Ancient Worlds gallery at the Manchester Museum also depicts the Medusa with staring eyes and protruding tongue but without wings (1983.335). It is a fragment of a terracotta revetment from roof decoration with floral ornament and a gorgoneion in high relief. It is thought to have been found in Campania in Italy.

A copper alloy escutcheon, or decoration for a bucket or situla of the Roman period depicts Medusa’s head (1981.935). The open ring behind her head is for the handle. Medusa has wings in her hair and two snakes’ heads, one on either side of her temples, issuing from the hair on either side of her forehead.

Looking forward to seeing all these objects on display in the Coral exhibition when it opens 29th November 2013.

Thanks to Keith Sugden in Numismatics who co-wrote some of the text.
Loading Comments...