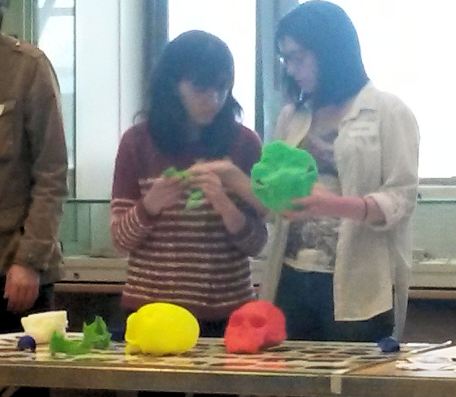 Last Saturday was the Big Saturday event for the Rediscovering Neanderthals exhibition. This temporary exhibition, which is supported by the Natural History Museum opened to the general public on 22nd April. On Saturday 30th April a number of us set up tables with Neanderthal or Neanderthal related objects, including casts of human skulls, animal fossils and stone artefacts.

One of the attractions  that seemed to go down very well with small children was the selection of ‘day-glow’ skulls created by PhD researcher Tom o’Mahoney. Tom helped the Museum by providing 3D prints of scans of Neanderthal skulls in a section that compared Neanderthals and modern humans. Tom’s research shows that Neanderthal children grew up more quickly than modern human children. They appear to have had a faster metabolism to help cope with cooler temperatures.

Neanderthals  needed roughly double the recommended calorie intake of an adult today. This seems to have been an adaptation to living in cold temperatures. They also had more robust bones, perhaps another adaptation to their preferred hunting strategy of ambushing prey, getting close to the animals to stab them with a fire-hardened stake (a copy of a 300,000-year-old-spear from Schöningen is shown in the Rediscovering Neanderthals exhibition)  a flint-tipped spear, even jumping on the backs of the animals concerned. It used to be said that Neanderthal skeletons showed a similar pattern of breakages and fractures to that of modern rodeo riders, but this seems to be typical of most hunter gatherers who get close to their prey, so perhaps it isn’t saying much about Neanderthals per se. Although Manchester Museum doesn’t have Neanderthal bones in its collection we do have plaster casts and they show how powerful the Neanderthals were. A  thigh bone or femur from Spy in Belgium is  much more robust than a modern human femur.

Cast of a powerful Neanderthal  thigh bone from Spy in Belgium

We also showed stone tools used by Neanderthals  including a 50,000-year-old worked quartzite flake from the cave sites at Creswell Crags in Nottinghamshire/Derbyshire and a 130,000-year-old Levallois point from a Middle Eastern cave site. It came as a surprise to some visitors that the younger object appeared to be more crude than the older example. Of course, this was not because the Neanderthals were less skilled at working stone. It was because the quartzite is considerably harder and it simply wasn’t possible to create a carefully-shaped tool, even with Neanderthal lithic technology. 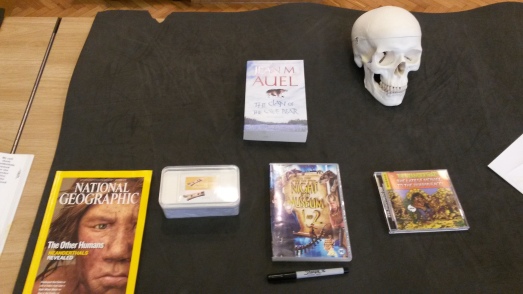 Neanderthals as shown in popular culture. Note Night at the Museum and CD  by The Neanderthals

During the conversations we had with the visitors  we often referred to the depiction of Neanderthals in popular culture. We showed a DVD and a music CD featuring Neanderthals. There was even a postage stamp of the supposed ancient musical instrument made by Neanderthals from Divje Babe site in Slovenia but this is no longer accepted as evidence of singing Neanderthals.

There was a steady influx of visitors throughout the day and many went away saying they would go up to the third floor to see the Rediscovering Neanderthals exhibition. Many were families with young children and one father even wore a  themed sweatshirt. It’s an entertaining take on the old chestnut about humans becoming more advanced as they evolve, the weaponry evolving from a handaxe to a spear to a Kalashnikov to Darth Vader’s lightsaber. It was an ironic comment about human destructiveness linked to evolution and progress. From this perspective perhaps the theory of modern humans committing genocide against Neanderthals isn’t so far-fetched after all.

Thanks to all the staff and students from FLS who supported the Big Saturday and especially to Loren Souchard who talked to the visitors in what is her second language.

Last Saturday 17th November was the Museum’s Big Saturday event to help celebrate the opening of our Ancient Worlds galleries. Anna Bunney, Curator of Public Programmes and Vicky Grant, Primary Outreach Educator, organised some events and activities for visitors. Campbell Price, Curator of Egypt and the Sudan, and I spent some time on the galleries talking to the public. Members of the Museum’s branch of the Young Archaeologists Club also came in to help piece together pieces of broken pottery from excavations in Manchester. Shiree and Gaby who are conservation student placements at the Museum were on hand to glue together broken pieces of pottery that the children were able to find. We have run this activity several times and each time it attracts as much interest from adults as from children.

Now where does that piece go?

Meanwhile I was talking to visitors in the galleries and using the Museum’s handling collection of ancient Greek artefacts as a talking point. People were really fascinated to find out about the objects, which included Classical pots and a replica of Mycenaean dagger. One of my favourites is a pot known as a lekythos showing ancient Greek warriors called hoplites fighting. This worked well with the ancient Greek Corinthian helmet on display in the gallery and the plaster cast of a frieze from a monument at Xanthos in Turkey. 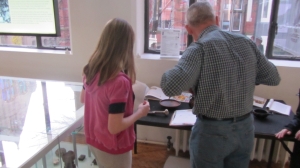 One young visitor called Haily was very interested in the Mycenaean dagger and drew a picture of it. I’ll post that image shortly.