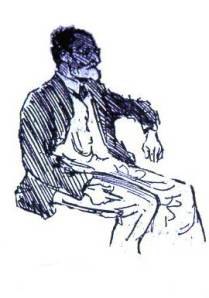 In a recent blog I explored the background to the animosity shown towards the Morfitt family of Atwick by Curator of Hull Museums, Thomas Sheppard. The origin of this feud seems to have been a quarrel over objects for the collections of Hull Museums and the so-called ‘East Coast Museum of Antiquities’ at Atwick in Holderness in East Yorkshire. After 1903 Sheppard does not have a good word to say about the Morfitt family and the Atwick collection, despite the fact that previously he’d praised the sons of William Morfitt, Aaron and Beaumont, for rescuing and piecing together a red dear skeleton found on the Holderness coast in East Yorkshire. I used the example of the press coverage of an Iron Age gold coin to show how Sheppard denied the Morfitt fmaily and their collection the ‘oxygen of publicity’. Comments made about the coin in the Hull Museum collection seem to reflect on a coin found by William Morfitt, although the latter was not named.

That example may be more or less convincing but there is another archaeological discovery that may shed light on the relationship between Sheppard and Morfitt. In 1913 builders working on the site of the intended Hornsea ‘Hydro’ or Turkish baths came across skeletons and associated grave goods. The Morfitt family who lived a few miles north of Hornsea at Atwick heard about the discoveries and a short article appeared in a regional newspaper. We know that the family recovered brooches and other finds because our old friend Canon William Greenwell wrote to William Morfitt on 4th April 1913:

‘The brooches are Anglian (Saxon) and there is no doubt they came from a cemetery… It is a great pity that the burials which have already been found should have been so carelessly treated [by the workmen on site]. There are no doubt many other graves on the site, but I fear it is too much to expect that any proper examination will take place. It is most regrettable that you are now unable to make an examination yourself…’

The material collected by the Morfitt family from Hornsea Hydro is now in the Yorkshire Museum, which acquired the Morfitt Collection many years after the events in question. 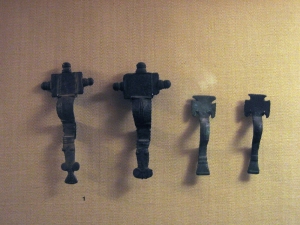 The objects include Anglian bronze brooches dating from the 5th-6th centuries. However, the Morfitt brothers and their father clearly didn’t get everything because Thomas Sheppard also heard about the Hornsea finds and made a personal visit to the site of the Hydro…

There is a very entertaining account of Sheppard’s encounter with the developer, which did not go according to plan, initially at any rate. Sheppard ran up against the same problem that the Morfitts faced, which Greenwell’s letter hints at, in the shape of the developer of the site. The developer sent the Hull Curator on his way with little ceremony, saying he was too busy with the new building work.

In the paper in the Hull Museum Publication series Sheppard writes that he withdrew to gather his wits before trying again. This time he pretended to have an interest in Turkish steam baths and engaged the developer in conversation. For some desperate minutes Sheppard admits he was on decidedly thin ice as he talked about the water supply, heating and provision of steam needed for a hydro before he succeeded in gaining the developer’s trust. Even so he daren’t mention the archaeological discoveries and he was immensely relieved when, as he was about to leave, the developer told Sheppard he could investigate ‘the other matter’ if he wanted.

Sheppard returned with one of his staff, planned and excavated the cemetery, and published an account of the Hornsea Hydro excavation in the Hull Museum Publications in 1919. This is where it gets interesting because in the text there is another of those intriguing oblique references to the Morfitt family which appear to be quite innocent, but if you are aware of the background they acquire an altogether different meaning:

‘Together with my assistant I visited Hornsea and found that a number of human bones had been excavated and that various small beads, and one or two brooches had been found, and had been divided among the workmen and others interested (my italics)…’

‘…although one or two objects had disappeared before we arrived, I fancy the remainder found a fit and proper home, as we excavated most of the skeletons’

These comments would certainly rub salt in the wound. Sheppard had talked round the man who’d thrown the Morfitts off the site and then acquired the objects for Hull Museums, at the same time inferring the Morfitt collection was not a fit and proper home! What do you think?