I recently had the great pleasure of showing lecturers from the University’s Classics department round the Museum’s  archaeology store. This is part of an initiative designed to raise the profile of the Manchester Museum collection and to encourage students  in the various schools and departments of the university to make greater use of objects in their studies. What better way to stimulate interest amongst students than by engaging the lecturers?

In this I was not disappointed. The other morning I showed a party of lecturers from Classics some Greco-Roman material that had came off display last year and other items in the store. It was great to see lecturers getting excited about objects in the collection. Here was a lamp depicting the Magna Mater. There was an apparently otherwise unknown figurine of the ancient Greek philosopher Socrates from Egypt in our metals store. Roslynne Bell later sent me a picture of a figurine of a tragic actor that was somewhat similar to the piece we have but these things must be as rare as hen’s teeth. It looks as though a mould was made from it to sell casts in the Museum shop years ago.

Another lecturer is working on medicine in the ancient world and is interested in votive offerings, of which we have examples of a model foot and no less than two wombs.  Someone else expressed interest in slingshot and arrowheads. We have some interesting examples with decoration and one with a Greek inscription that may be from the city of Kamiros on the island of Rhodes. Another lecturer questioned the attribution of a particular ancient Greek pot to a particular painter.

Seeing their reactions to the objects was great and there are now a number of suggestions for developing more interaction between the department and the Museum’s Greek and Roman collection. It is a simple thing to do to open up the store  when there is a conference so that delegates can see some of the objects in the collection and share their expertise about them.

All this bodes well for the future. We have already had discussions about setting up an ancient wargaming club based on the availability of relatively cheap, high quality and historically accurate plastic figurines. We don’t have the funding to introduce this straightaway but it would be another way of stimulating interest in the ancient world. My thanks to Roslynne Bell for supplying photographs of the visit. 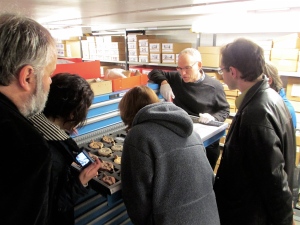 Last Saturday’s meeting of the Museum branch of the Young Archaeologists Club provided that rare spectacle of the members being too busy and preoccupied with their activity to stop for biscuits and squash! What was it that so engaged the attention of the children? The meeting was about ancient Greek warfare and in particular we looked at the ancient Greek hoplite.

No time for biscuits?!?!

Starting off in the first gallery of the Museum’s Ancient Worlds displays I showed the members the fine Corinthian helmet and the plaster cast showing hoplites from the Nereid monument at Xanthus in Turkey. I pointed out the large round shield known as a hoplon from which the soldiers got their name. The purpose of the meeting was to show the children how to make their own shields out of craft materials. 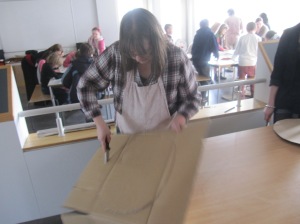 Carolanne cutting out a shield

Upon on the third floor of the Museum Clare, Carolanne and the helpers were already hard at work cutting out pieces of cardboard ready for the children to decorate. In true Blue Peter fashion there was one we’d prepared earlier to inspire the kids. I talked about the weight of the shield and the special grips – known as the porpax and antelabe – needed to hold it. The shield was used in a close-order formation called the phalanx some eight or more ranks deep. The shield gave protection to the soldier standing to the left of the soldier carrying it in the ranks. This was not a shield for use in open order. I am always amazed at the depiction of ancient battles in which the fighting is shown as a series of one-to-one duels rather than soldiers standing in formation.

The children chose their own shield designs and could choose from a Pegasus or winged horse, a bull’s head, the Medusa, a snake, a cockerel and an upside-down ‘V’ for the Greek letter ‘L’ used by the Spartans or Lacedaemonians. They were free to create their own designs too. The activity really engaged their attention and at the end of the session we lined the children up in a phalanx formation. There were just enough of these latter day hoplites to pose for a battlefield clash between the Spartans and the rest of Greece. It is gratifying to report that none of the children went home without their shield so it was an honourable experience for all concerned.

Greek phalanx at the Manchester Museum

First job of the New Year was to give one of my ‘curatorial talks’ to the Visitor Services Assistants or VSAs. This is part of a programme talks that curators give to the Front of House team with the intention of briefing them about the displays and the collections so that they can share the information with visitors and improve the service that they offer. The first topic of 2013 was warfare and I focused on the ancient Greek Corinthian helmet in the archaeology gallery of Ancient Worlds. We show a number of ancient Greek pots with paintings of soldiers wearing similar armour alongside the helmet. I explained that the soldiers were called hoplites on account of the large bronze-covered shield that they carried which was known as a hoplon.

About a metre or three feet diameter and weighing some 6kg it was quite a feat just to carry it. Imagine carrying round the equivalent of 6 bags of sugar on your left forearm all day! Fortunately there were special attachments called the porpax and antilabe on the inside of the shield. The hoplite slid his left arm through the porpax behind the centre of the shield and gripped the antilabe with his hand behind the edge of the rim. The rounded profile of the shield meant that it could be supported on the left shoulder too. Not only did it give excellent protection to the body, the shield could also be used offensively by driving it into the bodies of opponents.

Men standing side-by-side holding the shields and wearing helmets and bronze leg protectors known as greaves were well-protected but weighed down by the amount of bronze they carried. The Corinthian helmet on display weighs about 1.5 kg. Many ranks deep, such soldiers provided a solid and formidable formation known as the phalanx. Visitors can see details of the shield and its fittings on a plaster cast of a relief from the famous Nereid monument from Xanthus in Lycia in Turkey. It shows hoplites fighting and there is a view of the inside of one shield.

Ancient Greek hoplites from the Nereid tomb, Xanthos. Note the hand grip or antelabe on the shield

The method of carrying the shield had implications for how it was used in battle. As it gave most protection to the left side of the body there was a tendency for soldiers to lean to the right to shelter behind their fellow-hoplite’s shield. In battle, lines of heavily equipped soldiers drifted to the right. Perhaps this was deliberately to seek out the left flank of the enemy or maybe it was unconscious, the unintended result of the way the shield was carried. Maxine and Lill were even game enough to help with a practical demonstration. Maybe we should try it with the Young Archaeologists Club too.

Of course, effective though it was, this way of fighting came to an end with the development of the Macedonian phalanx in the late 4th century BC. This denser formation was characterised by soldiers equipped with a long spear or pike. Given the heavy weight of the pike or sarissa as it was called the pikemen needed both hands to carry it. They could not carry the heavy hoplon or shield as well as a pike and so they made use of a smaller shield – the aspis – held in position with straps. In the literature we read of formations of pikemen known as the ‘silver shields’ (the argyraspides), the ‘bronze shields’, the ‘white shields’ and even the ‘gold shields’. Thanks to the availability of miniature figurines this formation can be shown (see photo above) though this is just one quarter of what was known as a syntagma of phalanx, which was 16 men across by 16 ranks deep. Please note that it’s the first 5 ranks that should have their spears horizontal but interlocking the pikes at this scale is incredibly fiddly. I ‘m afraid my patience with a paint brush doesn’t yet extend to painting the remaining 192 model soldiers… Sigh. 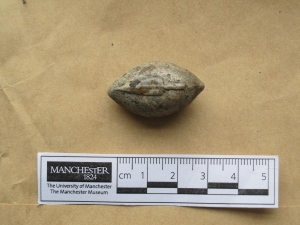 Last week we met Jelena from Opera to go through some case lay-outs in the third gallery for Ancient Worlds. Susan had done a mock-up of the fakes and forgeries case and we discussed the material to be exhibited.

About the same time I was researching some ancient weapons for a photo enquiry and I found some interesting but unusual slingshot in our collection. These almond-shaped objects, often made of lead, were whirled in a leather sling and hurled at members of an opposing army. One piece has an ancient Greek inscription and what looks like a depiction of a sword or a spearhead on either side.

Through our network of contacts I contacted Guy Stiebel at the Institute of Archaeology at the Hebrew University of Jerusalem and he asked whether the slingshot could have come from the island of Rhodes. I didn’t have any information about where it was found on the computer but the old index card told me it was bought from a Mrs Finch. I checked our catalogue for other items acquired from Mrs Finch and guess what? Of over 30 items associated with her, about half came from Rhodes. There seems to be a link with a Finch Collection at the Preston Museum in the early 1950s so that’s my next port of call to find out more. And the fakes and forgeries? 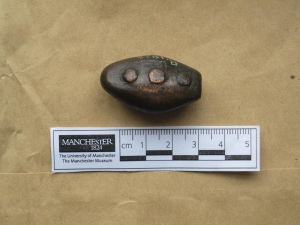 Another slingshot in our collection is made of copper or bronze. This is an unusual metal to use to make slingshot because it is relatively valuable. It looks distinctive with a tree on one side and three pellets on the other. Guy suggested that this might be a 19th century forgery. If we did want to add material to the fakes and forgeries display here’s something else that we could show.

It’s great that this information has come to light at this particular time. Not only do we seem to have identified another ‘false friend’ in our collection but thanks to Guy we may have a new line of enquiry on a genuine slingshot.

Guy has suggested that the lead slingshot may have come from the site of Kamiros on Rhodes. Knowing the name of the site would make of this all the more interesting. 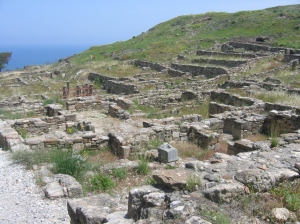