A Trio of Mystery Objects for Identification 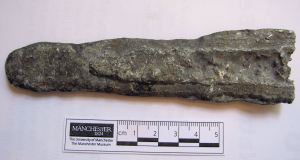 August is clearly the time of year for reporting unusual discoveries to the Museum’s identificatiosn service. The unusual metal object above was brought into the Museum. It has a silvery or white metal look to it but it’s not heavy enough to be iron or steel or lead. It looks like a casting because it has a very regular smooth and curving  surface on one side and a rough texture on the other (shown above).

The tip is quite battered and worn from rubbing or scraping it against something else and there is a slight lip where the material has been pushed back so it must be relatively soft. I don’t think this has been deliberately made as an object. It is not a knife or a sword. If it has had a use I suspect that it was opportunistic. The shape of the thing happened to meet the needs of whoever picked it up. As it was found on St Anne’s beach in Blackpool is it possible even that it was used to remove barnacles off the bottom of a ship? I don’t know. If it is man-made rather than natural I doubt it is much older than say Georgian or Victorian but that’s just a gut feeling. I’d be grateful if anyone who has seen something like this before and might know what it is would contact me. 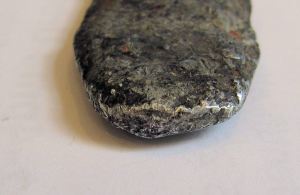 David Gelsthorpe, Curator of Palaeontology, who is responsible for the Musuem’s minerals collection kindly looked at the object very briefly on the way to a meeting and thought it might be natural and of mineralogical origin, say iron pyrites because of its crystalline structure.

Another mystery object that came into the Museum for identification is shown in the photo above. The enquirer brought it back from a holiday in Greece, though it’s best not to remove material from the country of origin. It’s hemispherical and the surface has lots of decoration. The reverse is more corroded but it has two ribs. The corrosion products are greenish so it appears to be made of copper alloy. I asked some of my Greek archaeologist contacts if they recognized it. One suggested it might be a brooch for a cloak or the decorative head of a pin or a button. It reminds me of the small, round, concave shield called an aspis that was carried by Greek soldiers called phalangites. This, obviously, is far too small to be a shield but the decoration is reminiscent of the depictions of shields in northern Africa about the time of the Punic Wars. 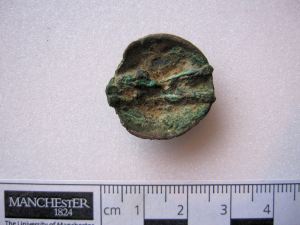 Back of the object

Finally, to complete the hat-trick of mystery, here’s a bronze tool with a rat tail tang where the handle was attached (long since rotted away). What’s interesting about it is that the blade isn’t sharp as you might expect and there are facets or champfers on either side.

They can be seen more clearly on the image below. It’s as if the cutting edge is on the outside edges of the tool. Is it some kind of burin? The metal used might suggest it is of Bronze Age date but if so it is incredibly well-preserved. Perhaps it was made for a spark-free environment environment in more recent times to prevent fires or explosions; or perhaps it is a specialised piece of kit used by a saddler, for instance.

If any one can shed any light on what these objects are I’d be grateful if they woud contact me via the comments function on this blog. Thank you.