Some time ago we were asked by tutors in the Classics department to support teaching using objects from Manchester Museum’s rich archaeology collection. We provided a list of objects from archaeology and numismatics to help the teaching of ancient Greece and Rome. Last week a number of preparatory sessions took place. Irit Narkiss from the Museum’s conservation team led a training session to look at not only how the objects should be handled but how to examine objects too. Obviously special care is needed when handling objects that may be fragile because they are several thousand years old but as a university museum we like to try and find ways of making practical use of the objects in teaching and research that is taking place at the University of Manchester.

Irit leading the session about objects

This came to fruition on Friday afternoon when we spoke to two classes of students and they found out for the first time which objects they would be working with. The objects include a mortarium, a miniature amphora, a Roman coin, some samian pottery, a lamp, a glass vessel, some coarseware pottery and a piece of ammunition from a Roman stone-thrower.

There was a ‘bran tub’ lucky dip whereby the students got their objects. As there were a few leftover items there was also the option to swap objects for other items the student might feel more interested in. They will do a written piece of work called an object biography in which they’ll explore what the object is, how it was made, what it was used for and what it tells us about life in Roman times.

This is something of a new development in working with colleagues in Classics to make objects available for teaching and hopefully it will help to surmount some of the difficulties that students may experience in making use of the Museum and its collections as an educational resource. Many are familiar with written records of the period but for some this will be the first time they will have worked with objects. 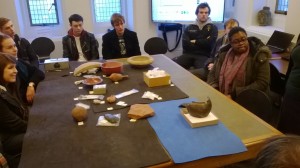 The benefits of working with objects to me seem obvious. I always think of the wonderful scene in the film Star Trek First Contact in which Jean-Luc Picard (played by Patrick Stewart) and his android officer Commander Data (played by Brent Spiner) go back in time and encounter the first spaceship – the Pheonix – to have warp drive. This development made interstellar travel possible for the first time so the rocket is in Picard’s time, several hundred years later, a very popular exhibit in the Smithsonian Museum.

As Picard explains: “It’s a boyhood fantasy Data. I must have seen this ship hundreds of times in the Smithsonian but I was never able to touch it”. Data asks “Sir, does tactile contact alter your perception of the Phoenix?” And Picard gives what I think is one of the best recommendations for handling objects in museums: “Oh yes, for humans touch can connect you to an object in a very personal way and make it seem more real”.

Of course this is lost on Data, who replies: “I’m detecting imperfections in the titanium casing and temperature fluctuations in the fuel manifold. It is no more real to me than it was a moment ago…”