This is the transcript of a filmed conversation between Prof Tim Insoll of University of Manchester and Prof Ben Kankpeyeng of Univeristy of Ghana talking about the mysterious figurines from Koma Land that are currently on display at Manchester Museum. An edited version of the filmed conversation will be posted in the third floor exhibition space shortly.

TI: I’m Prof Tim Insoll in  the Archaeology Department here in the University of Manchester and it’s my great pleasure to able to have a conversation with Prof Ben Kankpeyeng who’s the current Head of Department of Archaeology and Heritage Studies at the University of Ghana and who I’ve  been fortunate to be working with since 2004 in northern Ghana and in , in particular, since 2010 in the village of Yikpabongo, which this exhibitions is about, and of course, is the source of the fantastic figurines that you see in the exhibition here.

So Ben, why did you decide to, er, start the work in Yikpabongo again, because I know you were continuing the work of an earlier Ghanaian archaeologist?

BK: Yeah, Yikpabongo is significant for a number of reasons, er, within Yikpabongo we have some of those stone circular mounds that contain the unique cultural tradition that is now dated to about the 5-6th centuries.

BK: Yes, the people of Yikpabongo have been very cooperative since work started on these mounds in 1985 and, therefore, we felt that we should go back and do and carry out a lot more research in the area.

TI: And am I right that you actually worked here in 1985. You were one of the original team members?

BK: Indeed we worked there in 1983. We had to walk for twenty-five miles.

TI: So this got your interest going didn’t it and this was with Professor James Anquandah, who was the original discoverer?

BK: Er, following the end, I mean there was massive looting of the site because antique dealers got interested and, er, it was so horrible. We had to carry out some educational campaigns to get together on with Mr Ben Baluri Saibu the elected MP for Yikpabongo. Er, with the staff of the Ghana Museums and Monuments Board, we carried out some educational campaigns within the area, talking to the people. They need to preserve these sites because of the importance not only for archaeological research but also for the development, er, of these areas through tourism.

TI: But I’m right, well I know it is, because I’ve worked there with you since 2010 that it’s a difficult area to visit, isn’t it, so the tourism potential isn’t something that can grow at the moment. Is that correct?

BK: That’s correct. The area is called ‘the Overseas’

BK: … first of all it’s exciting sending… when you send students to the site, they get more interested in archaeology because as they excavate they see these figurines. It’s very fantastic for them. They get very excited. Not only do they get the figurines per se but they get the context that is exposed. It means the students need to think…

TI: I’d like to talk to you a little bit more about these contexts because one of the amazing things is because you can almost predict the figurines are going to appear by the material above it, can’t you? A sort of contextual arrangement of the sherds and the grinding stones and the sort of material that we have here and then as you dig down a bit further, I remember you teaching me this in the field, the first time I was there, and as you dig down a bit further then you begin to find these arrangements of these wonderful figurines as well.

TI: I’d like to say this is something the University of Manchester has been helping with and it has been a privilege to be able to work on these figurines, and, in particular, again, as the exhibition shows, with that scanning that we’ve been involved in… That Computed Tomography Scanning, which is really giving us an insight into this interior of the figurines, because people before only treated them as art objects, as representations, didn’t they, as you were saying about the art market. Once the scanning has looked inside, we can see that they were seen as powerful objects that may themselves have held medicines or some sort of substances so that has been very good, our collaboration on that.

BK: That’s the reason I invited you.

TI: I think your use of the term partnership is the right one because all this research, not just collaboration, it should be partnership, and this is something we’ve been able to do. Turning to the figurines themselves many of these are body-related that we can see that they are representing the human body and many of them are broken. They are fragmented and I know that we’ve been thinking that they are deliberately fragmented. Would you like to say a little bit more about that, why we… 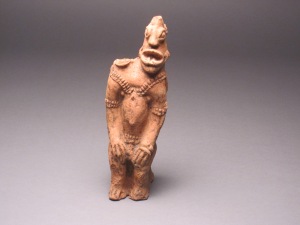 Where does the other head go?

BK: Some of them were intentionally, er, broken and whereas, some of the pieces, we can’t tell, er, but it’s likely part of ritual procedure which in some cases where you have a double head and one head is missing, where does the other head go? Some rituals were carried out, took place in different settings, those heads were removed to other areas.  …

TI: Because I think the original hypothesis was that these are burial grounds and … You’ve sort of overturned that.

BK: Yes the context in which we recovered human remains does not really indicate that they were intentional human burials. Rather we see a situation where probably only the long bones were placed somewhere. You don’t get the entire human remains and therefore you really wonder why these ones were placed here. And there was one part… we mentioned about the skull we excavated and we discussed a skull…We have searched all around, excavated all round, we never found any other part of the human remains.

TI: So there’s a lot of different heads put in there but besides the body we’re also learning a lot about how these people were dressed, aren’t we, and what they wore on them and their weapons and I think the most fantastic find that you made and we’ve given great centrepiece in the exhibition is the great camel or a horse. What do you think it is? Do you think it’s a camel or a horse (and the rider)? 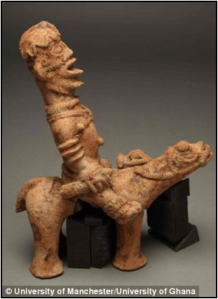 BK: I think it’s clear that it is the camel that is showing that the people who produced the cultural tradition have long distance contacts with the people to the North…

TI: Entirely right but it does comes to an end doesn’t it, Koma Land and we see a depopulation and an abandonment of the area. When? And Why? Why do you think and when does this occur?

TI: But before that we have a decline in the mounds. Your archaeology is showing, as we say in the exhibition, it indicates that there’s a sort of stop to the production of figurines tor example, isn’t there?

BK: Exactly. The time the real range is about the 8th/9th to 12th/13th centuries. That’s the age range we see the figurines coming in but since the but we know currently that we have the Koma people living within the area but the Koma oral tradition so not point to the fact that their ancestors produced the tradition.

TI: Yes that’s it. Then finally many of the figurines also show animals don’t they? … We don’t think that they are only wild animals. They are also animals there that may be symbolically important  aren’t there? There are those strange, er, sort of bird-like human figures. Samuel Encumba who you mentioned earlier, based on ancient understanding of Northern Ghana has said that are perhaps witches. Would you agree with him?

BK: Yes, you have to agree with him, looking like that but birds with human faces. That should tell you something that what is happening. We do have, er, local folk stories and we do and we do see it happening ethnographically that witches transform themselves into birds or other forms of animals whether cats or dogs and move around at night where they carry out their activities. That should tell us that some of these figurines so reflect the world view and the way people believe in…

TI: So they weren’t just making models of wild animals for fun?

BK: There are situations where they are curing the people. They had the diviners or who was participated in … cast out disease form individuals and pass it on to inanimate objects and these

TI: What we refer to as scapegoats?

BK: Some of these are appliqués that we found on what you call it, pieces does suggest yes some of the connections.

Chameleon or lizard with pustules for casting out disease?

TI: Because there’s one reptile or snake that has large sort of boil-like representations on it that could be them wanting the disease to go to that rather than to the human being.

BK: Exactly, the Human being yes

TI: Well it’s been an absolutely fascinating conversations and thank you very much.

You can read a review of the exhibition in the Journal of Museum Ethnography:-

See the Journal of Archaeological Science for publication of the sampling of the Koma Land figurines at the University of Manchester.

A transcript of a filmed conversation between Prof Tim Insoll of University of Manchester and Mr Ben Baluri Saibu from Koma Land Ghana talking about the mysterious figurines from Koma Land has been made available separately on the Ancient Worlds blog.