Harpy Tomb Gets Go Ahead

Panel from North Side of the Harpy Tomb at Xanthos in Lycia, Turkey

One of the areas that we did not have time to look at last year when we opened our new Ancient Worlds galleries last October was the corridor between the Numismatic gallery and the third gallery of Ancient Worlds. Which was a shame given that some of the conservation work on the objects we planned to display had already been done. In fact the objects concerned, the plaster casts of the Harpy Tomb from Xanthos in Turkey, have already featured in the Ancient Worlds blog. Earlier this week I met Senior Technician, John Miller, to discuss how we might go about displaying them. 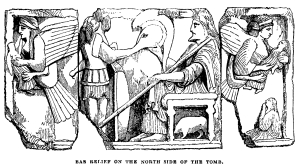 Unfortunately we don’t have a complete set of the casts of this impressive 2500-year-old funerary monument, which may be no bad thing because the exhibition space we have in mind wouldn’t be long enough, unless we took out some rather useful cupboards to create the space needed. We’ve decided to get round the problem of not having all the pieces of the jigsaw by showing images of the missing panels alongside plaster casts of the panels we do have. In this way we’ll be able to give visitors an overview of this amazing monument using attractive objects from the store that would otherwise hardly be seen, and in a location that lends itelf to a more visual experience.

The plaster casts are copies of panels that once decorated the four sides of a monument known as the Harpy Tomb or the Kypernis tomb at Xanthos, in Lycia, in south western Turkey. The panels were at the top of a stone tower. They appear to show a ceremony taking place at the Lycian court. The ruler, who is sitting on a throne, receives offerings. The ruler and the courtiers hold sweet-smelling flowers or fruits to their noses. One of the figures is carrying Classical Greek armour: a hoplon shield and a Corinthian helmet.

It is not clear what the winged figures on some of the panels mean. They may be carrying off the spirits of the dead to the afterlife. In Greek mythology winged women called harpies tormented people. The best-known depiction of  Harpies is in the film Jason and the Argonauts (1963) starring Todd Armstrong and Nancy Kovack. It is the special effects of  Ray Harryhausen that stay in the memory. They put modern CGI to shame. In the film Jason and his crew land on an island to seek some information from the blind seer Phineus, who is being tormented by the harpies. Every time he is served a meal the harpies turn up and eat his food or defecate on it. Jason catches the harpies in a net, imprisons them in a cage and in return Phineus gives him the information he needs to find the golden fleece.  All of which is great fun, especially when you’re a nine-year-old lad and it’s the best thing you’ve ever seen on TV in your entire life.

The original panels from the Harpy Tomb at Xanthos are in the British Museum. They were collected by English archaeologist Charles Fellows (1799-1860) who travelled in Turkey and found the ruins of the town of Xanthos in Lycia in south west Turkey. At this time Britain and France were competing with one another to collect antiquities for their respective museums. With the help of the Royal Navy, Fellows collected stone carvings from some of the tombs at Xanthos for the British Museum.

3 comments on “Harpy Tomb Gets Go Ahead”