Anna, Campbell and Jamie at the recent faces and Places Big Saturday

Yesterday (16th November 2013) Campbell Price and Anna Garnett, volunteer, Jamie Skuse, and I helped out at the Faces and Places Big Saturday  at Manchester Museum. The aim of the event was to promote the Koma figurines from Ghana that are now displayed in the Museum’s third floor temporary exhibition space. The faces of the figurines are very expressive and Vicky in Public Programmes set out tables in the Discovery Centre so that visitors, especially families with young children, could make their own figurines out of modelling clay. We selected objects from the Egyptology and Archaeology collections with the intention of inspiring the children’s imaginations to make figurines but they were also a popular talking point with other visitors.

Egyptian faces on the handling table

Campbell and Anna brought out some objects from the Egyptology collection: facial reconstructions of the Two Brothers, a replica of an encaustic protrait, similar to those on display in the Museum’s dedicated gallery, the lid from a Canopic jar depicting the ancient Egyptian god Imsety, busts from Alexandria and a shabti (above). 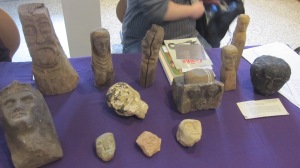 Heads from the Archaeology collection

For my part I brought out some head related objects from the archaeology collection including a late Iron Age/Romano-British stone head from Tyldesley near Manchester, a tricephalic piece from Standedge Tunnel, some replica carved stone  heads and some rather handsome carved wooden head made for an earlier Lindow Man exhibition. I suspect they are copying discoveries from the important votive deposit at the source of the River Seine at Sequana in Burgundy, France, as well as some stelae found at Rochdale (see above). Keith Sugden, the Museum’s Curator of Numismatics, kindly entrusted us with a selection of coins showing Roman emperors.

Head inspired by one of the Koma Land figurines

It was great fun recognising some of the figurines that visitors made and displayed on the table outside the Discovery Centre. 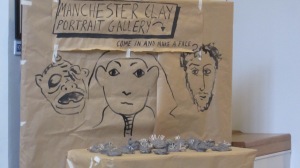 ‘Sanctuary’ or ‘shrine’ showing off the clay figurines made by visitors

As part of the day I showed members of the Museum’s branch of the Young Archaeologists’ Club the facial reconstruction display in Ancient Worlds. There was even time to join Maxine’s inaugural ‘Women in Ancient Worlds’ tour which explored the topic of women and the contribution of women archaeologists and Egyptologists in the new displays. Maxine, who is a Visitor Assistant and  member of the Museum’s Front of House team, showed us the copy of Amelia Edward’s A Thousand Miles up the Nile, the Etruscan terracotta womb votive in the archaeology gallery as well as exhibits in the Egyptology gallery of Ancient Worlds.

Maxine with visitors on the Women in Ancient Worlds tour

We saw over a hundred people at our handling table and gathered some really useful feedback about how interesting visitors had found it. Jamie’s contribution went well beyond the call of duty when he kindly posed for a photograph with one of  the carved wooden figurines (below). What a trooper! As well as being a brilliant Movember photo opportunity, this makes me think there might be some mileage in a future photographic  project comparing the profiles of Roman emperors and empresses with those of modern day visitors. A great time was had by all as they say. A big thank you to everyone who gave up their Saturday to help with the event.

One comment on “Faces and Places Big Saturday at Manchester Museum”