The forgotten 1066 battlefield of Fulford

Battlefield casualties (from Chas Jones The Forgotten Battle of 1066 Fulford)

Fulford is arguably the battle that made the Norman Conquest possible, although it has largely been overshadowed by the battles of Stamford Bridge and Hastings. Over the last years a considerable amount of work has been done to try and identify the site of the battle. On Saturday I went out to Fulford with members of the Medieval Section of the Yorkshire Archaeological Society for a tour of what our guide, Chas Jones, believes to be the site of the battle of Fulford. 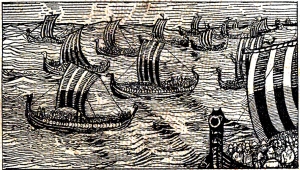 Fleet (from Chas Jones The Forgotten Battle of 1066 Fulford)

In the summer of 1065 the Northumbrians rebelled against the unpopular rule of Tostig. Having lost control of northern England Tostig appealed to his brother Harold I of England to reinstate him after he became king but when Harold refused, Tostig sought help from abroad. In September 1066 whilst Harold was expecting the Normans to land on the south coast, Tostig and Harold Hadrada of Norway landed in East Yorkshire and sacked Scarborough. They sailed up the Humber with a fleet of an estimated 400 vessels, exploiting high tides to land at Riccall about 3.5 miles from Fulford. Tidal rises of between 7 and 11 m have been recorded which would have helped the Scandinavians.  In the Domesday Survey Tostig owned land at Riccall and so he must have been familiar with the phenomenon of high tides at this time of year. Earls Morcar and Edwin moved their forces to cover the likely invasion routes on the rivers Wharfe and Ouse. The Northumbrian army  marched out from York to meet the invaders. Unfortunately it is not known precisely where the battle took place but Chas Jones made a plausible case for the battlefield being located along the banks of the Germany Beck close to the present village cemetery. A plaque in the playing field commemorates what an earlier generation of researchers thought to be the site, very close to where Chas believes the battle took place. 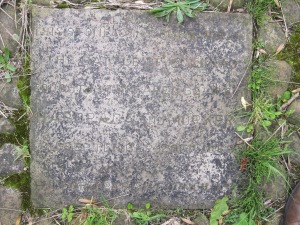 Commemorative plaque for the battle of Fulford

Sources for the battle are sketchy at best but Chas has drawn on material from Scandinavian sagas. Though written down in the 13th century there are grounds to suppose that the composer was concerned to record historical information accurately. 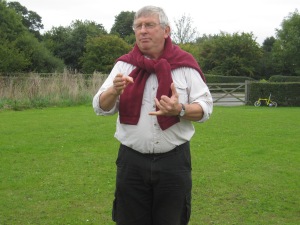 Chas set the historical context for the battle and explained the topography of what he believes to be the battlefield of Fulford. The glacial moraine on which the village stands is crucial because it overlooks low-lying swampy ground and there are steep slopes on either side to defend the flanks.  In front of the position Germany Beck served as a moat, protecting the approach to York from the south along the moraine. 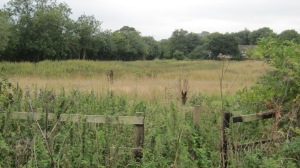 the slope down to the Germany Beck

Chas drew on the Orkney Sagas to piece together an account of the battle. Tostig’s forces tried to cross the Germany Beck but were thrown back by Morcar and the Northumbrians. However the Northumbrians were then taken in flank by Hadrada’s Scandinavians who were waiting their moment in low-lying ‘dead’ ground close to the River Ouse. The Northumbrians fled along the Germany Beck and Chas told us about archaeological work in the area immediately north of the posited battlefield which has revealed hearths and furnace bottoms where broken arms and armour were recycled. Chas showed us the centre of the battlefield on the moraine, the Germany Beck and the dead ground near the river where the Scandinavians waited.  Walking back to the village it was striking just how steep the edge of the moraine is.

Over a number of years Chas has sampled various areas of the battlefield looking for evidence. He thinks he may well have this but unfortunately he couldn’t show us any military finds because the objects are in the York conservation lab. However, he did say that iron nails and furnace bottoms found along the line of the Northumbrian retreat have excited considerable interest amongst Scandinavian archaeologists.

A short time after the battle Harold arrived, having marched the length of England at great speed. He caught Hadrada, Tostig and their army by surprise at Stamford Bridge. The Scandinavians suffered heavy casualties and it was said that only a small fraction of the original invasion fleet returned to Norway. Having learnt that William of Normandy had landed, Harold  returned south. His men were tired after their epic march and not all of the reinforcements had arrived. At Hastings Harold was killed with many of his closest supporters and England was ruled by William I.