Letters to the press

In previous emails I’ve explored the controversy over two bone points found in Holderness in East Yorkshire in northern England during the early 1920s.  The Curator of Hull Museums, Thomas Sheppard, accused the people who found the objects of being charlatans. As we have seen this was the not the first time that the Hull Curator had come across the Morfitt family. In the early 1900s he had been a regular visitor to their cottage at Atwick in Holderness. Sheppard and Mr William Morfitt had a serious falling-out at the end of 1903 and afterwards Sheppard criticised the family relentlessly. In 1922 A.Leslie Armstrong published two bone points from the Morfitt collection and argued they were Maglemosian or Mesolithic. Sheppard implied they were forgeries. Two committees of enquiry met to decide whether they were authentic but the finds were so ambiguous both Sheppard and the Morfitt family claimed victory.

One of the committees noted in its report that the evidence on which Thomas Sheppard’s  judgement was based ‘was no longer verifiable’. This was rather mysterious and it would be some eight years before the truth emerged. The comment was picked up by Armstrong who responded: ‘Mr Sheppard’s charge of forgery is based upon certain evidence said to have been given him by a person now dead – therefore unverifiable’. (1923). Who was this dead person and what had they said? It was only after the last member of the Morfitt family had died that Sheppard revealed ‘The Maglemose harpoons were made by Mr B. Morfitt in the presence of his sister who was spending a weekend with Mrs Sheppard and I and told us how it was done’.

The sister was Charlotte Morfitt who died in 1914. Sheppard claimed to have held back this information out of sensitivity to old William Morfitt’s feelings. William died in 1923, Beaumont died in 1929 and Sheppard revealed the source of his information – and why he was so certain that the Maglemosian points were forgeries – in 1930. Perhaps surprisingly Sheppard tried to acquire the Morfitt collection for Hull Museums when the future of the collection was under discussion. However, Hornsea District Council planned to put the collection on show though nothing ultimately came of this proposal and in the end the collection was transferred to the Yorkshire Museum, where it still is.

When the bone points were bequeathed to the British Museum after William Morfitt’s death, Thomas Sheppard obtained casts and put them on display in Hull Museum’s ‘fakes and forgeries’ cabinet. It looked as though Sheppard had had the last word. Or had he?

Another barbed point was found amongst ‘moor log’ dredged from the bed of the North Sea on the Leman and Ower banks off Lowestoft in 1931. In 1932 a bone point was found on Hornsea foreshore but it was not published until after the Second World War.  Sheppard retired in 1941 and died in 1945. No less than thirteen – thirteen! – were found in the vicinity of Brandesburton, not far from Hornsea, during gravel extraction. Some of the latter were reported by J.B.Fay, Assistant Director of Hull Museums, who, like Sheppard, spent most of his life working for the institution. In 1956 Clark and Godwin wrote ‘In view of an old controversy it may be added that close examination of the Skipsea and Hornsea specimens alongside those from Brandesburton can leave no further doubt as to the genuineness of the earlier finds.’

If the bone points were authentic what are we to make of Sheppard’s accusations and his motivation? Sheppard made much of the fact that the circumstances of discovery of one of the points seemed non-sensical. It’s in the entertaining poem quoted in an earlier blog:

‘Til Mr Morfitt passed one day,
With iron rod to find his way.
And fourteen feet it penetrated
And then it stopped; or so ’twas stated.

Aaron and Beaumont Morfitt. Beaumont is standing on the right. Is he holding the iron rod he used in prospecting?

How could Beaumont (the Mr Morfitt in question) have inserted an iron rod into peat deposits and then dug down to recover the object he had detected by probing? It doesn’t add up, does it? It doesn’t if Beaumont was standing  on the ground surface and digging down. But what if was standing at the base of a cliff that had been eroded by the sea? Beaumont could be fourteen or more feet below the ground surface as measured from the top of the cliff, but still be standing on the foreshore and probing the deposits horizontally. See photo below. The object Beaumont found would be a depth of fourteen feet relative to the top of the cliff  without Beaumont having to dig down to reach it. 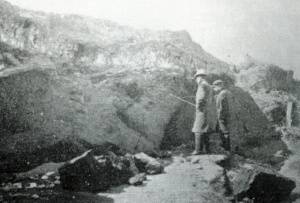 And what of Sheppard’s statement that no peat had been found at Hornsea (in which the Hornsea example was said to have been found)? In August 1902 the Hull Scientific and Field Naturalists Club visited Hornsea to see a section exposed during the erection of a new gasometer. Beds of gravel, shell marl and peat (my italics) were observed, recorded and published in the Naturalist (1902, p.366) by none other than Thomas Sheppard!

The main point of evidence – that Charlotte Morfitt told the Sheppards that her brother had made the bone points as a joke at the expense of their father could not be verified because Miss Morfitt had passed away in 1912. Elijah Howarth of Sheffield Museum said that ‘Beaumont was always fond of a joke, and had a very entertaining fashion of humour but there was no shadow of deceit about him’. There were some curious lengths of bone with crudely-forked ends and an incised groove apparently for winding string in the Morfitt collection. They are illustrated in Hull News (1/2/1902). William Greenwell refers to them in his letters to William Morfitt though he did not know what they were. Is it possible Charlotte saw her brother making them and told the Sheppards and that these fabrications became confused with the bone points that were genuine? If on all other grounds the Holderness points or harpoons are to be considered authentic, might this confusion or misunderstanding explain the controversy? Or was there a darker motive?

Sheppard’s bruising encounter with William Morfitt in 1903 changed the nature of their relationship. Having been humiliated in this way, did Sheppard allow his personal feelings to colour his judgement? No matter what the Morfitt family found, I suspect that Thomas Sheppard would have found some way to cast doubt on it or belittle it. The Morfitt family was eventually vindicated but archaeologically the controversy may have been more damaging. The mesolithic site at Star Carr is rightly famous for the preservation of a range of organic and other evidence, including the oldest dwelling. Had the discoveries along the Holderness coast at Skipsea and Hornsea been taken seriously, is it possible that this kind of evidence might have been found many years earlier? Might we be talking about Skipsea as the type site for mesolithic archaeology? We’ll never know of  course because sadly the sea has long since washed the deposits where the bone points were found away.

2 comments on “Genuine after all?”