The Curator Strikes Back

This Blog continues the series about the relationship between Thomas Sheppard, Curator of Hull Museums and the Morfitt family of Atwick in Holderness. In the last instalment Leslie Armstrong claimed two bone points or harpoons in the Morfitt collection were Maglemosian or mesolithic, i.e. about 10,000 years old. Thomas Sheppard insinuated that the bone points were forgeries. A committee of enquiry was called to investigate the matter… 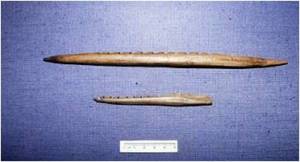 A fortnight after the  British Association meeting in Hull Mr M.C.Burkitt, Prof.J.E.Marr and Dr A.C.Haddon met in Cambridge to compare the Holderness barbed points ‘harpoons’ found by the Morfitt family with similar specimens from Kunda in Estonia. The ‘Cambridge committee’ as it came to be known concluded that ‘in type, general facies, colour, and in the partially mineralised condition of the bone, the Holderness harpoons were identical with those from Kunda… both the Holderness harpoons are genuine antiquities’. However, another committee consisting of Sir Hercules Read, Prof A.Smith Woodward and Prof. P.F.Kendall was appointed by the Council of the Royal Anthropological Institute to investigate the matter in London on 6th December 1922. Its conclusion was curiously ambiguous:

‘In general we see no evidence in the objects themselves that is conclusively against their genuineness… A curious feature is that the workmanship of the barbs is so similar as to point to their being the work of the same individual’.

This enabled both parties to claim victory. Leslie Armstrong and other supporters of the Morfitt family felt vindicated because the committee had said there was nothing against them being genuine but Shepaprd seized on the same committee’s comment that they seemed to have been made by the same individual. Admittedly there was a lot of  confusion over the context or layers in which the points were found. The Skipsea point was said to have been found ‘in silt beneath 5 feet of peat.’ When Beaumont Morfitt was called to the podium at the British Association Meeting in Hull in the autumn of 1922 he said “the points were 12 or 14 feet down and resting on boulder clay”. Sheppard argued that no-one could dig that deep on the Holderness coast and beds of peat of that depth had never been found. And if they were indeed made by the same individual it didn’t make sense. If they were found in different contexts deposited with an interval of hundreds, if not thousands of years, in between them, then that person must have lived an awful long time! 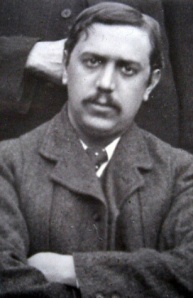 The Morfitt family had kept details of the discovery of the bone points in note books but the books were not produced in evidence before the committees, very likely because the entries would not have reflected well on the Morfitts, who made spelling mistakes and often wrote in what can only be described as ‘stream of consciousness’ style. The Hornsea point was said to have been found ‘on the margin of the mere whilst excavating for a new gasometer at Hornsea at a depth of 16 feet below the surface in a lacustrine bed amongst the roots of sedges and reedso. The discovery is dated 1915. A sub-committee satisfied itself that no such bed of peat deposits existed at Hornsea.

In publications the dates of discovery of both the Hornsea and the Skipsea points shifted in a way that suggested to Sheppard at least that the claims were mischievous. The Hornsea bone point is also recorded as having been found in 1905; the Skipsea example in 1902 . As there is a letter from Canon William Greenwell to Mr Morfitt dated 27th January 1902, I think the date of 1902 for Skipsea is reliable even if other dates were later published for its discovery. It seems this confusion may have been more down to human error and shoddy note-keeping by the Morfitt family rather than conspiracy. Even if one committee had ruled in favour of their genuineness, the second had raised doubts which Thomas Sheppard exploited ruthlessly. Ultimately it all looked rather damning for Armstrong and the Morfitts.

The London committee had also concluded ‘Mr Sheppard appears to have had strong grounds for doubting the authenticity of the harpoons, but the evidence on which his judgement is based is  no longer verifiable.’ 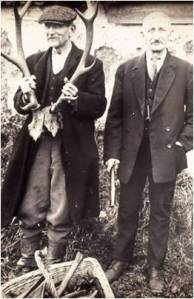 No what on earth did that mean? To answer that question we really have to fast forward to 1929 after the last member of the Morfitt family, Beaumont, had died. Thomas Sheppard finally revealed the strong grounds for doubting the authentity of the ‘Holderness harpoons’. But that’s the subject of the next blog in this series…