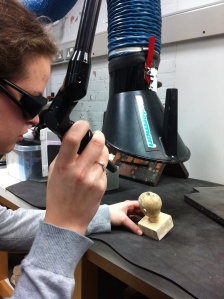 As promised here is the rest of the information about laser cleaning.

There are three different types of laser used in conservation at the moment, UV, visible green light and Infra Red. For stone and plaster only visible green and infra red lights are used. The photo with a green flash is the visible green light laser but the infra-red cannot be seen with the naked eye, the flash is still occurring, only we can’t see it.

The lasers are class 4 lasers which means that they are extremely hazardous to the eye! Eye protection is required which block out 99.8 % of the light emitted. The class 4 laser means that light bouncing back from the surface is still strong enough to damage the eye, not just the light as it directly leaves the laser. As conservators are actively working on the object they need to be able to see what they are doing without fear of damaging their eyesight so glasses are available for each of the types of laser. They only block out the wavelength being emitted but allow all other wavelengths through. The light energy turns to heat energy at the point the beam interacts with a surface, this can produce a very high temperature and so can burn the skin! It is important to cover up skin and be careful not to allow the beam to pass over unprotected skin. Having said this, however, these lasers are used medically for skin conditions and tattoo removal treatments.

One of the benefits of laser cleaning is that it allows porous surfaces like  plaster to be cleaned to a much higher standard than other more conventional techniques, such as solvent cleaning or dry cleaning. Solvent (acetone, and IMS and water 50:50) cleaning was tested on a plaster cast from the archaeology collection but caused some damage to the surface. Dry cleaning with a rubber was therefore carried out but left a patchy overall effect. The laser removed all of the black dirt and dust so a more uniform result was achieved. However, the technique was unable to remove the greasy yellow dirt from the surface left from sources such as handling. This is not unusual. 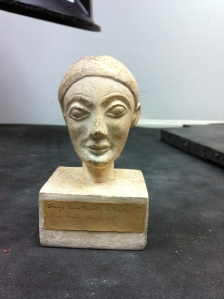 Another benefit from laser cleaning is  speed. The plaster cast only took 15-20 minutes to clean and that was shortly after Gabby and Abby had learned the technique so they were still being cautious! Cleaning the surface with a rubber took the best part of a day. Laser cleaning is therefore often used on large monumental statuary and architectural sculpture to save time.

Lasers can also be used as a form of non-contact cleaning so surfaces that might otherwise crumble when they were touched can be cleaned without causing further damage.

The course at the Conservation Centre in Liverpool was led by the laser technicians and sculpture conservator at the National Museums Liverpool. This is a requirement for using lasers in conservation in the UK. Manchester Museum will take delivery of an infra-red laser by the end of this week and we hope to start using it to prepare objects for the new Nature’s Library displays. The exhibits includes fossils and other geology objects, but the conservators will also be cleaning coral specimens as these are too fragile to attempt mechanical cleaning. Cleaning with lasers can be a little disconcerting at first as all that can be seen is a small circle of light on the object and then the dirt has disappeared. Also because it a ‘non-contact’ form of cleaning there is no feel of touch or pressure as with most other forms of cleaning. This makes you feel a little disconnected with what is happening. However the technique is very easy to pick up after completing a few practice pieces and the ease of use and effectiveness of the treatment makes it great fun to carry out.

Gaby kindly sent photos of ‘before’ and ‘after’ treatment with a rubber, as well as photos of the plaster cast after  cleaning it with the laser.