Young Archaeologists and Ancient Etruscans or what to call your rabbit 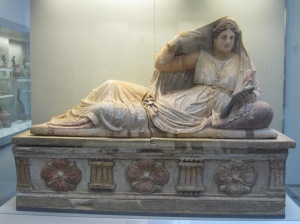 In mid-January the first of the Manchester Museum’s Young Archaeologists Club meetings for 2013 took place. We were scratching our heads wondering what to do because it was too cold to take the children out on a site digging and we had already talked about the ancient Greeks, Romans and Egyptians in previous sessions. However, there was one people of the ancient world we hadn’t looked at and they are the Etruscans. The Etruscans lived in northern Italy and were very powerful and influential between about 1000 and 100 BC. The Greeks called them Tyrrhenians and the Tyrrhenian Sea is named after them. The Roman name Tusci gave rise to the modern region of Italy called Tuscany, favoured holiday retreat of a former prime minister.  The early kings of Rome were Etruscan. The Manchester Museum happens to have quite a good collection of Etruscan material and a few objects are shown in the new Ancient Worlds displays. A catalogue of Manchester Museum’s Etruscan collection was published by Jean Turfa in the early 1980s.

I got out a selection of Etruscan objects from the stores. I set up four tables and put out groups of bronze figurines, brooches, pottery, stone cinerary urns, inscriptions and votive offerings on each. We talked about the rich mineral resources that were the source of the Etruscans’ wealth and prosperity and how contact with ancient Greek traders stimulated a passion for imports of Greek things such as pottery. Not that they didn’t have their own graceful and attractive pottery called bucchero ware. We explored the role of Etruscan women who seem to have had slightly more freedom than their Greek and Roman sisters. A facial reconstruction of an upper class Etruscan woman made by Prof.John Prag and Dr Richard Neave of the University of Manchester is shown in the new displays. Her name was Seianti Hanunia Tlesnana and her beautiful sarcophagus can be seen at the British Museum. It offers one of those rare chances to compare a depiction of someone who lived in the ancient world with a facial reconstruction based on their physical remains.

We stopped in the middle of the session to go and see Etruscan objects on display including the facial reconstruction, a votive offering of a woman’s womb and a carved marble slab from a cinerary urn.  This gave the children a chance to get up and move around after about half an hour of sitting. We returned to the Discovery Centre for the last topics about writing and religion. The Manchester Museum has a few Etruscan inscriptions and one of them is all the more interesting for being longer (most Etruscan inscriptions are quite short and often do no more than mention someone’s name, status and family relationship). This one has been translated and it mentions ‘Hercle’ or Heracles. It may refer to the offering of a statue of the hero.  I distributed a photocopy of the names of Etruscan gods and goddesses compared with their Greek and Roman equivalents. The children were amused when they found out the Etruscan equivalent to Dionysos was called Fufluns. Someone said it was a good name for a rabbit! 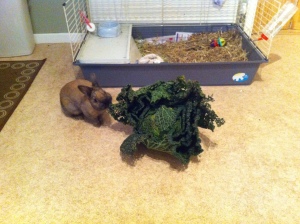