Mithras Sculptures on the Move

At the end of last week Sam Sportun, Senior Conservator at the Manchester Museum, and I went over to Salford Museum and Art Gallery to see some pieces of Roman sculpture that came from a temple dedicated to the god Mithras. The Curator, Peter Ogilvie, kindly took us down into the basement and showed us the pieces, which were found in Manchester during the 19th century. Having seen line drawings of the sculpture it was very exciting seeing them ‘in the flesh’ so to speak and we are most grateful to the Salford Museum and Art Gallery for allowing us to borrow them for our new Ancient Worlds displays. They are part of the Roman heritage of Manchester, which we are celebrating in our Ancient Worlds displays by bringing together material from a number of different institutions in the city, including the Salford Museum and Art Gallery and the Manchester Art Gallery. I think it will be the first time the Mithras sculptures have been on public display for many years. 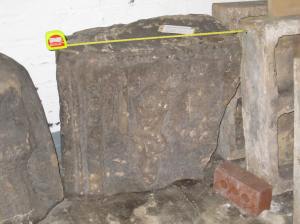 Mithraeum at Carrawburgh on Hadrian’s Wall- photo taken during the 1980s.

You can still go and see the site on Hadrian’s Wall, although the actual inscriptions have been moved inside to protect them from the British weather.

Mithraism for a time was a competitor with Christianity and was very popular amongst Roman soldiers. Devotees progressed through a number of different grades.

Moving the Mithras sculptures from the Salford Museum and Art Gallery

Sadly the site where the Manchester mithraeum was found was destroyed by development but some of the carved stones survived at the Salford Museum. They were published in Francis Bruton’s 1909 book The Roman Fort at Manchester. 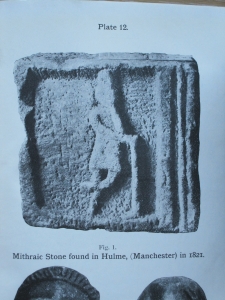 Mithraic sculpture from Hulme (Bruton, 1909, The Roman Fort at Manchester)

3 comments on “Mithras Sculptures on the Move”