The photograph above shows an example of the work of ‘Flint Jack’ or Edward Simpson. Jack achieved notoriety in the late 19th century by selling fake antiquities to unsuspecting collectors and museum curators. Eventually the truth got out and Jack went to Ireland to lie low for a time. We know ‘Jack’ used a number of different aliases like ‘Fossil Willy’, ‘Bones’ and ‘Shirtless’.

We’re very lucky to have in the collection of the Manchester Museum a reference to his activities in a letter written by the photographer R.J.Welch, the conchologist, to Whitworth Art Gallery and Manchester Museum benefactor Robert Dukinfield Darbishire in the early 1900s. 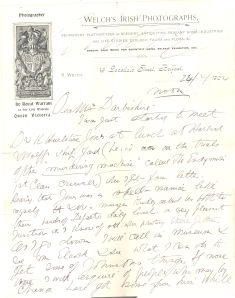 There’s some wonderful period detail about lunching with the heads of department at Harland and Wolff’s shipyard before Welch refers to a young naturalist of his acquaintance, A.W.Stelfox, who met Jack:

The young collector ‘turned out a tray of Stone Jack’s forgeries made for the Stelfox children about 10 years ago while they lived for some months at Bushfoot, Giant’s Causeway. Arthur saw some of them made on the spot & knows all about ‘Jack’ and his work. Jack only worked enough to get money for usquebaugh [the water of life or whisky]. I do not know any part of Ireland where the Tourist trade [? word not clear] (alas that my business should be to still further develop it) has more entirely demoralised the smaller farmer class than about the Causeway and Bushmills district, they neglect their farms and work to sponge on or mildly blackmail timid Saxon tourists during the summer months as guides & c & c.

They are very poor forgeries most of them. If useful I could photo the best and worst for you some day. Did you ever get from Mr Wm Gray his photo of Stone Jack at work. If not I will try and get you a print or enlargement.’

The letter is dated 24th February 1904, so if Stelfox saw the fake arrowheads being made ten years earlier, they were made in 1894. The young natural historian was Arthur Wilson Stelfox (1883-1972), who trained as an architect but found employment more suited to his interests in the National Museum in Dublin. His research in the fields of conchology, entomology, botany, archaeology and genetics was recognised officially when he was elected an Associate of the Linnaean Society in 1947. Stelfox must have been 9 or 10 when he met Jack. One can imagine Jack, good-natured despite his trade and his drinking, demonstrating how he made flint arrowheads for the no-doubt wide-eyed children.

We have two dozen of Flint Jack’s arrowheads with the Welch letter and it seems likely that they are the fakes that are referred to. However, there is a mystery here. Many articles have been written about Flint Jack and they put his date of birth in the early years of the 19th century (1812 or 1815). He seems last to have been sighted in 1874 and is said to have died in 1875. If that is the case, what is he doing turning up nearly twenty years later near the Giant’s Causeway in northern Ireland in 1894? He would have been in his late 70s. The alternative explanation is that Stelfox didn’t meet the real Flint Jack but another imposter who used the same alias ‘Stone Jack’. That may be the case but Welch’s letter implies that Stelfox had encountered the real ‘Flint Jack’ (as opposed to one of his emulators) because he goes on to talk about William Gray’s photograph of Flint Jack at work. 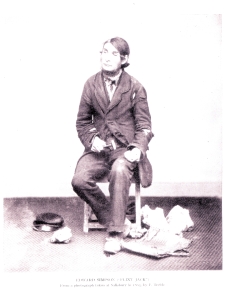 Thanks to my old friend Terry Manby over in the East Riding, I now have a copy of a newspaper report about a meeting of the Belfast Naturalists’ Field Club in 1873 at which Mr William Gray gave a description of Flint Jack and his works. The article gives details of Jack’s Irish tour: ‘From Belfast he went to Antrim, Ballymena, Balleymoney and Coleraine, from whence he visited the Giant’s Causeway – spending a Sunday there.’ Whoever the faker may have been who met the Stelfox children in 1894, Stelfox and Welch believed it was the well-known Flint Jack.

The letter adds a little local detail about an encounter with a faker of prehistoric flint artefacts. If nothing else it adds gives another human interest story to the Ancient Worlds galleries that visitors will be able to explore through download materials using a mobile device.