We’re recently been looking in more detail at our third gallery in the Ancient Worlds displays. In particular we’ve focusing on objects of which the Museum has many examples such as lamps, ancient Egyptian shabtis and Roman glass vessels. It’s been a pleasure to welcome back our long-standing archaeology volunteer, Caitlin Barratt, a graduate of the University of Sheffield, who has been helping us enhance the records of our lamps. Caitlin is being supported in this work thanks to a Bursary for Museum Internships from the Society for the Promotion of Roman Studies. The information that Caitlin is enhancing will be made available to the public via mobile devices, freeing us of the need to include reams of written text in the new displays. 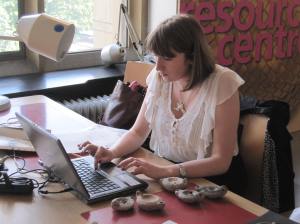 Caitlin with some new friends from the lamps collection

The decoration on one of the lamps proved difficult to make sense of so I went to the library and borrowed copies of Donald Bailey’s British Museum Catalogue of Lamps. The existing description on the Museum record said the decoration showed a centaur but when we looked it up in the Lamps Catalogue it turned out to be some men struggling to restrain a bull. One of the men had been tossed in the air by the bull. What was more interesting perhaps was that this lamp was a copy or forgery made by a workshop in Naples in the late 19th or early 20th centuries. It is somewhat ironic that a workshop producing copies, fakes and forgeries should command a level of academic interest you might expect to be shown to the real thing. But if we can’t tell copies or fakes from the real thing how can we be sure what we’re dealing with? Exploring some of these questions is part of the purpose of this third gallery in Ancient Worlds. 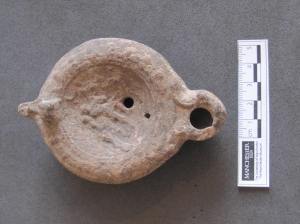 Fake lamp from the Naples workshop

It isn’t absolutely clear whether the lamp was made to deceive anyone but it looks as though this example has gone unrecognised in our collection as being of later manufacture. Caitlin is now keeping her eyes peeled for others.

It raises an interesting question, however. There is a display of copies, fakes and forgeries in the third gallery. Should we display this lamp there or keep it with the other Roman lamps and point out in the download information that it is was made long after the Roman Empire had ended?

Our thanks to Caitlin and to the Society for the Promotion of Roman Studies for supporting Caitlin with a museum internship bursary.