The lid is off the box: cataloguing 19th century photographs of Egypt

Hello, my name is Lynsey, and I currently volunteer for the Manchester Museum. While reorganising the archaeology reference library, I came across an exciting discovery, a box of photographs of sites in Egypt which I thought were really interesting. Bryan (Deputy Head of Collections and Curator of Archaeology) suggested that I make notes on them with a view to making digital archives of them at a later date. As I worked my way through the photographs it became evident that these were remarkable, beautiful photographs showing historical shots of Egypt in the later 19th century. 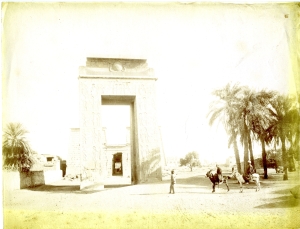 Entrance to the Temple of Khonsu at Karnak by Peridis. Later 19th century (MM: AUA.939.87)

The box is full of photographs by photographers such as A. Beato, P. Peridis, J. Sebah, and the Zangaki brothers, who all produced a plethora of images for the tourist market. Travellers with a thirst for all things Oriental could purchase the photographs to take home with them. They could then show their friends and family where they had been, and the things they had seen. They could in essence recapture their experiences in the exotic East.

Egyptians with donkeys at the Ramesseum. Photograph taken by the Zangaki brothers in the later 19th century (MM: AUA.939.58).

But it is the Zangaki brothers’ photographs that I am most fascinated by. They are less well known than some of their contemporaries, this is due in part to the lack of information and records on the brothers, and partly due to the popularity of photographs produced by their contemporaries. The brothers have a distinctive style. They took photographs of Egyptian landscapes, ancient Egyptian monuments, and close-up shots of hieroglyphs and other Egyptological detail as they travelled up the Nile.

Statue in the Temple of Luxor. Photograph taken by the Zangaki brothers in the later 19th century (AUA.939.85).

The Zangaki brothers also took photographs of local Egyptian people, but they did so with dignity and respect. The photographs are interesting anthropologically and historically, illustrating what life was like in Egypt at this time when increasing numbers of Europeans were familiarising themselves with the land and its monuments. 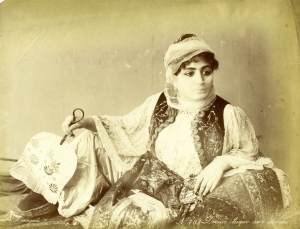 4 comments on “The lid is off the box: cataloguing 19th century photographs of Egypt”