In April 2011, we embarked on a new initiative to work with Christopher Dean (TADs – Touch and Discover systems) in the development of touch-based ‘haptic’ 3-D technology for the new galleries, which we hope be a means of increasing access for blind and partially sighted visitors. The project has attracted funding from a European foundation, in recognition of its potential benefits for the visually impaired.

Haptic technology allows the user to feel a physical feedback from the 3 dimensional digital scanned form on the computer screen and it really needs to be experienced physically to be understood as it is not the normal way that we interact with our computer screens; although haptic feedback is certainly a developing field and I am sure we will see the impact of present research in our everyday before long.

This Tuesday we started to scan our objects for the haptic device and these were drawn from a group of objects which have been chosen in collaboration with a working group from Henshaws (Society for blind people).
Below you can see Andy Goldstraw (Europac) scanning one of chosen objects which is a Pottery bowl with four hippopotamus figures modelled separately and attached to the rim. The bowl is recorded as being from the Naqada 1 period which dates it between 6400–5500 BP before present. The bowl is a firm favourite with staff and visitors alike and the Hippos are very life like and endearing (unlike their fearsome reputation).

Behind the arm of the scanner you can see the hippo and bowl rim magically appearing on the computer screen in real time. The scanner uses a laser beam and some very clever engineering and mathematics to create a very accurate 3 dimensional model. 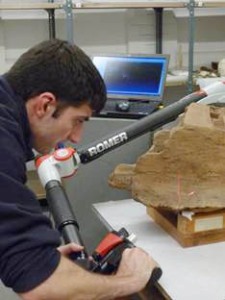 The second picture shows Andy scanning a soul house and you can see the red stripe of the laser beam.

It is a model made of pottery, with two stories. The upper storey is supported by a row of columns.  There are two doors in the back wall of the ground floor lead to an inner ‘room’. Models like this were placed in tombs during the Middle Kingdom (between 2055 BC and 1650 BC), with the idea of providing food and shelter for the dead person’s soul. Many examples, like this one, have a spout along the front edge, where offerings of water or beer might have been poured over the model and then collected below.
Andy was able to scan most of the 3-D form of this object, but can only scan where he can direct the beam of laser light, which on this type of object means that there were inevitably areas which he was not able to “capture”.

Christopher (Dean) will have to work on the 3D scan information in the computer with another type of software, which allows him to model up the sections digitally. This is done in a similar way a sculptor would do with clay, to complete the 3D scan of the house so that the visitor can explore the inside rooms. He will use photos and scan data to guide him. 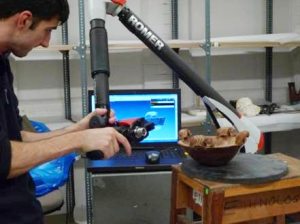