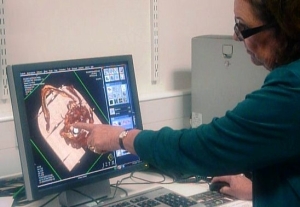 Most members of the medical profession could be forgiven for running a mile when they heard they had a 2000 year old patient but when Sam Sportun the senior conservator and I took the head of Worsley Man over to the radiology department in the Manchester Children’s Hospital in the Central Manchester University Hospitals NHS Foundation Trust for scanning recently the radiographers were positively thrilled.

The head was found in a Manchester peat bog during the 1950s and, like Lindow Man, was initially thought to be a modern murder victim. The police investigated and after an autopsy the Coroner ruled the head was ancient. The head was kept in a pathology store until the 1980s when its significance was realised because of the discovery of Lindow Man. The head even seemed to share the same pattern of injuries: blows to the head, garrotting and a slit throat.

It was precisely these injuries that a team of medical and other experts at Nottingham Trent University including Prof. Brian Pyatt, Professor of Environmental Quality, and Mr James Bourke and Prof. Patrick Bradley, who are both Visiting Research Fellows, wished to investigate.

Thanks to the help and enthusiasm of Professor Judith Adams and her team in the radiology department at the Children’s Hospital it was possible for us to take the head over for computed tomography (CT) scanning. Although he has been scanned before the CT technology has become more sophisticated over the years and it is hoped that a fresh look might reveal new insights about how Worsley Man died.

Although the head won’t be going on display in the new Ancient Worlds gallery we are going to show the facial reconstruction and this recent work will provide new information that we can share with visitors. It is as yet too early to draw conclusions but the photograph gives an idea of how powerful a tool scanning can be as Prof Adams looks at the first images. Our sincerest thanks to Prof Adams and her team at the hospital and to Mr James Bourke and his colleagues who instigated this new investigation of a historic Manchester discovery. 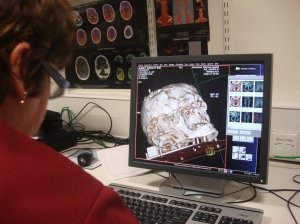 4 comments on “Worsley Man at the Manchester Children’s Hospital”