Harpy Tomb on the Move 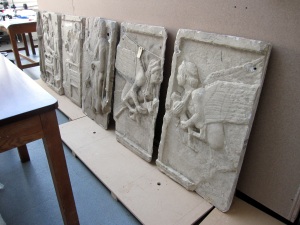 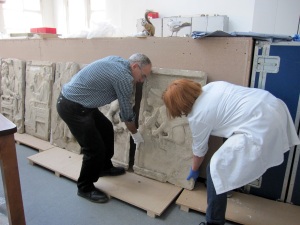 The post Bank Holiday week got off to a busy start when Sam, Susan and I moved the casts of the Harpy Tomb up to the Conservation Lab for cleaning earlier this morning. The Harpy Tomb is the popular name given to an impressive funerary monument at Xanthus in Lycia in southern Turkey.

The tomb took the form of a tower and carved stone reliefs decorated each side at the top. They depict offerings made to seated figures and winged female figures flying off with men in their arms and talons. They may represent the spirits of the dead being transported to the underworld. Lycia at this time (the early 5th century BC) was heavily influenced by Greek culture but had its own beliefs. The sculpture was discovered by Sir Charles Fellows and acquired by the British Museum.

It reminds me of the wonderful episode in Jason and the Argonauts in which Jason and his men capture the harpies, which have been making a nuisance of themselves. The film was another showcase for the stop-motion animation of Ray Harryhausen.

The casts are going to be displayed as part of Ancient Worlds in a linking corridor between what are now the Mediterranean and the Numismatic galleries at the Manchester Museum. We wanted some objects from the collections of a size and format that would fill the space and be visually stimulating without lots of text. This being a public access corridor it is difficult to use the space in a more interactive way.

The casts are going to be cleaned and repaired before they go on display late next year.