The Manchester Museum’s contribution to the Festival of British Archaeology took place today (28th July 2010). With Anna Bunney, Curator of Public Programmes I had arranged to show a selection of pottery from the Museum’s rich archaeology collection.

I got together some ancient Greek and Roman pottery, some incredibly old sherds from a site at Yanik Tepe in northern Iran and some Victorian pottery discovered whilst excavating Roman Manchester.

Given a choice between finding out about 6,000 year old pottery and piecing together broken Victorian willow-pattern ware, guess which the children preferred? The Victorian pottery. This was something of a revelation to us but we quickly put the ancient material to one side and spread out the Victorian finds over the table.

Children gathered like bees round a honey pot and in no time at all they were busy sticking the fragments back together with stickly tape. The dedication and enthusiasm of the kids for this massive 3D jigsaw was amazing.

Where does this bit go?

Meddie, who’s on holiday at her gran’s (she told me she comes from Surrey), put together a fine tankard decorated with a wide blue stripe beneath the rim. Other children battled heroically with a transfer printed teapot .  By the end of the afternoon we had four or five pots two-thirds complete . The hands-on had won hands-down over the 6,000 year old pot. 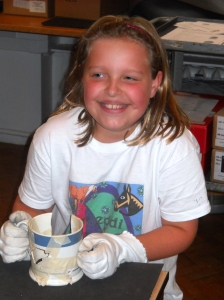 Meddie and the Victorian tankard she pieced together

We can run this  sort of activity quite easily because we have lots of boxes of broken Victorian pottery from sites in the centre of Manchester. In fact this must be the first time it has been looked at since it was excavated in the 1970s. The excavators were more interested in the Roman layers but the more recent material is also of great interest as we found recently when we ran an event about food in Manchester. Visitors were as fascinated to see marmalade jars and lemonade bottles as they were Roman mortaria.

We should definitely consider making the pottery available as part of the Ancient Worlds galleries.

2 comments on “Festival of British Archaeology”